Published in Your Sinclair #18 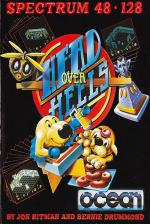 Head Over Heels | A Heady Brew | Down At Heels

Ocean's follow-up to Batman has had us turning somersaults! Marcus Berkmann flipped his lid, and now reports from Ward E, third bed on the right...

Remember Batman? Who can forget it! Jon Ritman and Bernie Drummond's Filmation-style arcade-adventure was a true-blue tie-dyed classic, a game that stands as one of the best ever seen on the Speccy. Combining razor-sharp graphics, endlessly fascinating gameplay and an excellent plot, it was one of Ocean's very finest hours (three o'clock being one of my own best). Virtually my favourite game ever, in fact. Until Head Over Heels came along, that is...

And guess who are responsible for this little beauty? Yup, the self same J Ritman and B Drummond. The newie's not a sequel to Batman - no jetpacks, no Penguins and no munching Pacpersons are anywhere to be found. But it's so similar in style and approach to old Batty that it might as well be. What's especially corky about Head Over Heels is that the plot's just as good as Batman's - but totally different! Instead of one character, you control two, Head and Heels. Both come from a bizarre planet called Freedom, where creatures are made up of a pair of symbiotic animals who operate together as one [Are you sure about this? Sounds grubby to me! - Ed] H and H are spies attempting to overthrow the evil regime on the planet Blacktooth, whose empire extends to four nearby planets. As you start the game they've been captured, separated and imprisoned in the castle headquarters at Blacktooth. You've got to get them together and then liberate the odd planet or two before legging it.

Not an easy task, especially when there are over 300 screens to negotiate. It'll take you long enough just to get Head and Heels together, and longer still to get them off Blacktooth. Some of the puzzles are fiendish - either hard to work out (yup, it's lateral thiking time) or requiring finely honed arcade skills (you know, the sort I don't have). Virtually every screen has a different conundrum to solve - some seem impossible on first, second and 43rd sight, but may depend on whether you've chosen head or Heels (or both) to tackle them. Each has different abilities - Head can jump a long way, and fire doughnuts at nasties, while Heels is swift on his feet and can carry things around the screen. Put them together and their abilities are combined.

As you move around the course, you'll often have to split them up temporarily - which can cause problems if one or other gets knocked off, 'cos the survivor is unlikely to get out of the labyrinth without his little friend's help. Sometimes you'll need to split 'em up, put 'em back together and so on, all on the same screen. The combinations are almost endless.

In a way you can't help envying the format, which must be one of the most inspired and adaptable in all computer gaming. Most objects and characters are based around a 3D block size, and all have different capabilities. Some blocks can be moved around (and therefore picked up by Heels) and used to get H and H up to otherwise unreachable higher levels. There are also some rather more static blocks, plus conveyor belts, blocks that vanish when you step on 'em, springs, ladders and switches (to turn off the nasties) - all the classic features of this type of game. You'll also find reincarnation fish (which let you restart at that location when you're killed), cuddly stuffed white rabbits (which magically enhance your powers in various ways), doughnuts, a hooter and even hush puppies!

There's loads more to Head and Heels, but half the fun is finding out for yourself. Like Batman, the game has an addictiveness and a compulsive quality which personally I have never found in any other came. Whenever you solve a problem, there's always another one just around the corner - and when you've become skilful enough t get through a screen, you don't find that it holds you up when you play the game again, so you don't get bored. Besides, thanks to the carefully placed reincarnation fish, it's possible to spend hours and hours on just one game, if you're not too careless with your spare lives early on.

If there's any important difference between the two games, I'd say that Head Over Heels is marginally easier to play, but marginally harder as a set of puzzles. Mind you, having played Batman to death, I'm used to placing characters on the last pixel of a block before pressing the jump button. And besides, I'm biased. It may not be everyone's cup of Ovaltine - it's scarcely lightning fast (except where it wants to be) - but it's my bet that Ocean has a real winner here. You'd be batty to ignore it!

Head Over Heels | A Heady Brew | Down At Heels

It may not be everyone's cup of Ovaltine - it's scarcely lightning fast (except where it wants to be) - but it's my bet that Ocean has a real winner here.