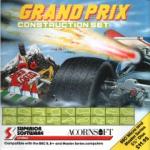 Though it's bound to be compared with Revs, Grand Prix Construction Set is more of a game than a simulation, says David Lawrence

When I put my Lego away last year, I thought I'd seen the last of model-making and toy car racing. Now here comes Superior Software with the computer version of Scalextric (although they don't come out and say it). Grand Prix Construction Set isn't just another 3D race track simulation; it isn't as realistic as Revs, but is a lot more challenging than Overdrive.

As the name implies, it is possible to construct your own race tracks, and this is where the game comes into its own. It's like having a bottomless box of Scalextric, and you can go way beyond the simple up-and-over figure of eight circuit. The other main feature is that two people can play at once.

On booting the disc, you are presented with the designer screen. You must first enter the names of the players and whether or not you are using joysticks. You are then given the option of designing a new track, loading a saved track or selecting one of the 18 pre-defined ones. These include all the tracks from Revs and the one from Pole Position (Kyalami).

My first niggle comes when you try to load a track: you can only give six-character filenames. This is exceptionally annoying if you have two drives and you want to load (or save) a track on drive 1 in directory T. Typing ':1.T.' leaves you with only *one* character for the name! It would also be nice for it to be possible to display a disc catalogue.

Designing tracks is great fun and very easy. You first position the start/finish straight and then build up the rest of the circuit by selecting track pieces from the four different straights, six bends, chicanes and bridge. You can make the circuit as convoluted as you like and even cross over the track already present (although this is not shown as a bridge in the game). You need not link up fully: if you are facing the finish straight, pressing C will close up the circuit for you.

You can delete sections of track by pressing L, but on a long track this does take some time, as the track is redrawn. When you are satisfied, name the track and save it if you want to (although this is not necessary to play the circuit).

My second niggle is that if any filing system error occurs or if you press A for abort, the whole program re-starts and you have to enter names again. It is also not possible to edit saved tracks.

Once you have selected, designed or loaded your track, the game itself loads. The screen is divided into Mode 1 at the bottom and Mode 2 at the top. The Mode 2 is further divided into two 3D views of the track, each only a couple of inches high, but they give you all the detail you need. You are first asked for the number of laps (one to nine) and whether your opponent is human or one of the computer-controlled cars. These range in skill from one (very easy to beat) to five (Nigel Mansell). On level one, the computer merely drives in the middle of the road; in higher levels he's harder to push around, and in level five he'll have a go at you. Two mini circuit plans are then drawn and the cars placed on the track.

This is where the split Mode 2 is used - your yellow car races in the top window and your opponent's red car in the bottom. You can also see your opponent's car if it is just behind or not too far ahead of your car, and the same goes for him.

Your only controls are left, right, accelerate and brake. The cars are provided with a four-gear automatic gearbox, so you don't have to worry about that, and have a top speed of 240mph. The positions of the two cars are indicated by a block on the maps at the bottom of the screen.

As with Revs, cornering is the hardest thing to master. Each type of bend has a different maximum speed. Exceed it and you're in danger of skidding violently. Limits range from 112mph on a double sharp to 208mph on a banked bend. If you go over a hump-backed bridge doing more than 180mph, you're a goner, as you are if you hit the kerb at excessive speed or ram the other car. In any of these cases your car explodes and your opponent wins. Bridges and chicanes (which aren't real chicanes, merely narrow bits in the road) are depicted graphically, but unfortunately banked bends are not.

At the end of race, you get the chequered flag, and are declared the winner, if you're lucky. Another couple of niggles here. First, the other player is not given the chance to finish and so see the lap time. And secondly, the screen is cleared after a few seconds and the 3D view re-drawn so the maps are lost and have to be re-drawn the next time you play.

I like the game. The track designing is a great idea and the racing runs very well. If you can't join the elite who play Revs, or you want something superior to Chicane, Pole Position or 3D Grand Prix, then Superior Software's Grand Prix Construction Set is for you.

I like this game. The track designing is a great idea and the racing runs very well.