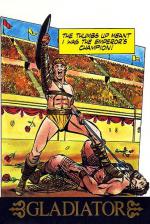 FOLLOWING in the footsteps of all those kung-fu programs comes Domark's offering, Gladiator. None of your fancy footwork here, and none of your oriental inscrutability either. This one pitches straight into the gory arenas of ancient Rome, as you pit your strength and wits against other gladiators in an attempt to win the favour of the crowd, and your eventual freedom from slavery.

It has to be said that Gladiator is one of the most inaccessible combat games yet devised. There are 25 joystick movements, and 45 weapons to choose from. Controlling the stick is very difficult at first. The movements include lunges to various parts of the body, four-way movement, jumping and ducking, a couple of defensive moves, cuts, throwing, and turning.

You fight with three weapons and can choose from shields, swords and spears, axes, flails, nets and tridents. The third weapon is a smaller piece such as a dagger, kept in the belt until you lose one of the original weapons.

At first it's hard to work out what's going on. However, once you realise that there's not much point slashing with a spear, or throwing your shield at the opponent, you can concentrate on a selection of the moves available. We found a shield and long spear very effective against gladiators armed with a short sword. Keep prodding long enough and down they go. However, the Spectrum soon produced net and trident men who posed different problems.

The graphics are excellent, with large gladiators in an arena surrounded by spectators. The emperor sits in his box and gives the thumbs up or down when the contest ends - a nice touch. The animation is very effective indeed.

There is a lack of documentation of the weaponry. It's difficult to work out precisely what you are carrying. Are all the swords much the same? If not, what's the difference?

Our other small gripe is that the double-fire set of movements is difficult to access. In the heat of battle it's very easy to get the timing wrong and find yourself throwing a weapon instead of moving backwards.

However, for the dexterous and the violent, Gladiator is a great game, well produced and certainly offering more in the way of options than any of its fellows. The play is not as fluid as those kung-fu contests, but you'll find it a hard slog to win your freedom and lay down the sword in peaceful retirement.

The play is not as fluid as those kung-fu contests, but you'll find it a hard slog to win your freedom and lay down the sword in peaceful retirement.