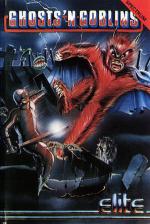 Yup, Elite's done it again. After bringing arcade classics like Commando and Bomb Jack to your micro - both Spectrum chart-toppers - it's now produced Ghosts 'n' Goblins. And a very creditable version of the original it is too.

Be warned, Ghosts 'n' Goblins is pretty difficult and you'll be going places where angels fear to tread. You start off in the graveyard, hopping over gravestones and up and down a cliff face while avoiding the zombies. The screen scrolls extremely smoothly from left to right as you move, and the zombies, with arms outstretched shamble after you in droves. Though high scores can be earned by standing still and knocking them off as they appear from under tombstones, that cuts down your time to complete the level, and with only three minutes for this section, you need every second you can get.

It doesn't leave much time for weapons collecting. If you see a zombie struggling along with a cauldron, shoot him and you'll be able to pick up either a dagger, a lance or a fire ball. These have various properties and each has its uses. The dagger is the fastest and you can have four in the air at a time. The lance is marginally slower and only three can fly at a time. The fireball can only be lobbed a short distance and is probably the most unwieldy weapon to fight with.

A neat twist is that in each game you get two chances. The first time you charge into a zombie, you give a huge shudder and your suit of armour flies off into the night, leaving you naked and almost defenceless. Next time you're hit, you're jolted off your feet and fall back as a heap of bones. One of your five lives lost.

As you attempt to climb the cliff you'll come under attack from killer owls (killer owls?) which dive down, and deadly weeds which lie in wait as you clamber on to the next level - they spit at you and it is as much a matter of luck as good judgement if you manage to survive the combined ministrations of these two killers. Both behave intelligently and move or fire at you when you move - they're deadly accurate too. Told you it was difficult. We're not even half way through the first level and already I've been killed a billion times!

Eventually you'll meet the gremlin - a real pleasant character. As soon as you see it take a few steps back and daggers at the ready, fire. As you do, it rises into the air. Jump up and continue firing. You'll need several direct hits.

The graphics up to this point are very close to the original arcade game and Keith Burkhill, the programmer, has managed to reduce colour clash to a minimum. Use of simple colours reduces attribute problems still further. The trade-off is that the graphics for the central character has had to be kept small and because of the lack of colour it is often difficult to make out objects. For instance, if you run over a zombie and pot, the weapon left behind is difficult to depict. The same goes for the owl, perched like a stone just waiting for you to move.

These are minor problems though and in no way detract from the game play. Later screens combine a number of exciting features from the arcade game, and these prove even more difficult to overcome. Each level has three areas to get through, with different scenery and problems. At the end of each level is a 'special' monster, or two which must be killed to gain access to the next.

Fight through the freezing corridors of the ice palace and avoid the floating goblins. Then make your way through the slums, avoiding the devils and into a warehouse, full of pipes, levels and lots and lots of big, big, goblins. These need to be hit more than once, are semi-intelligent, and make sure you've sussed out an escape route. Then on to the guardian monsters and into the third level, which is so tricky that even the Elite programmers have problems getting through it.

Ghosts 'n' Goblins is for the nimble fingered only. It's frustratingly addictive, extraordinarily difficult, requiring impeccable timing and not a little luck. And if you manage to get all that together you might just save the princess.

OK, so like Imagine's Green Beret, Ghosts 'n' Goblins is really no more than a levels and ladders game, but that doesn't seem to matter. The original graphics and furious action more than compensate.

Yet another classic arcade conversion from Elite. Fiendishly difficult and more-ish. Very hot.