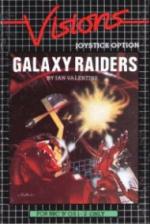 If there were a pedigree organisation which held the details of the parentage of computer games then the entry for this program would read as follows:

Galaxy Raiders, sired by Star Trek out of 3D Space Ranger. As you might have guessed, Galaxy Raiders from Visions is a space, shoot'em-up type game but with the added feature of strategy.

As in Star Trek there is a whole galaxy to explore which, for convenience, is split into various sectors.

When you are in a sector you can search out the enemy ships and try to destroy them before they get the same idea and try to damage you.

There is a computer to help you in targeting your phaser and missile weapons systems and full range and target information printed on the head up display.

Your list of enemies is far greater than just the fleet who try to destroy your ship. Almost as dangerous is the lack of energy, which you can see being constantly depleted as you survey the galaxy. Strategy is therefore not only desirable but essential when playing this game.

There are almost as many controls as you have fingers to touch the keys. Direction can be set to either joystick or keyboard input, both of which are very responsive. Twenty other keys control the rest of the game.

There are three types of alien in the display which act differently and are valued to differing degrees. The fighters are the easiest to kill, with carriers being almost indestructable by phasers. They do tend to fall to well targeted missiles though.

While you are engaging all the aliens in your current sector the others are surrounding and destroying your friendly starbases.

All told, quite a difficult problem. As you can see from this description, which doesn't even begin to explain all the nuances, this is a complex yet enthralling game to play.

The instruction book covers some 10 pages and is well written, explaining all the options in detail.

Being a fully machine code game the response to your commands is almost instant and this adds to the 'real time' feel of the game.

If you want to try being Buck Rodgers or even Captain Kirk, this could be the game for you. It is certainly worth a second glance for all those who are getting tired of arcade games.

Other BBC Model B Game Reviews By Dave Carlos

Being a fully machine code game the response to your commands is almost instant and this adds to the 'real time' feel of the game.