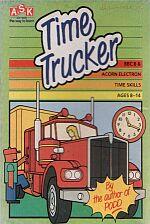 Time Trucker is "a sophisticated learning program which helps children aged 8 - 14 understand the relationship between the twelve hour analogue and the 24 hour digital clocks". This is done in a game situation - "ASK programs are designed, above all else, to make learning fun" - with some interesting problems to overcome and skills to exercise.

During the game, which can be played with either keyboard or a joystick, you have to drive a truck around a map, pick up goods from farms and deliver them to a depot. At the same time you have to work out how many collections and deliveries can be made within the time limit. So you see, it's not just one of those "What time does the clock say?" drill and practice type program.

ASK, quite rightly, pride themselves in their use of sound and graphics - have you seen that delightful little character called Podd? - and in this program the quality of the graphics is first rate. The screen is divided into four areas: a section of the map with roads that unscroll as you travel along them; the lorry with its load(s)/digitial clock; the produce to be picked up plus the times of opening where appropriate; and the analogue clock showing the time.

The theme music is decidedly catchy - the sort "Big John" would enjoy blaring from his cab radio. I suppose today's children are used to working with the radio or TV in the background, but for those like myself who would find it decidedly off-putting in the corner of the classroom - have you ever tried to concentrate on answering TV Quiz questions with the threatening background music? - you'll be pleased to know there are various volume levels.

There are three levels of difficulty and three different maps from which to choose. At the lower level you use the analogue clock with a 12 hour digital clock, while at the higher levels, the 24 hour digital clock is introduced. The levels of difficulty are set by the type of trucker you elect to be: Trainee, Trucker or Super Trucker - no sexism in this program, you can be a male or female trucker! Your map selection offers the map as printed in the handbook or two secret maps on which you'll have to find your own way around - the second of these also has road repairs! I've got mixed feelings about this option: random road repairs on the printed map would be a useful option, but the secret maps would be a "luxury" for the school user with little computer time, I think.

You'll be well advised to accept the suggestion to try the job for the Trainee Trucker to start with. You aim to collect and deliver as many orders as possible in eight hours. Each item on the order earns £100 and each completed order earns a bonus of £1,000 on delivery to the depot. On arrival at each farm, you have to read the time on the analogue clock and enter it into the digital clock.

In the Trucker game, you collect and deliver as many orders as possible in four, two-hour periods and earn extra money by picking up items that aren't on the order. Careful planning is essential as farms are only open at certain times and at the end of each two hour period the depot closes and the shutter comes down. When that happens you can't unload or get paid for any undelivered items.

Super Trucker has to visit farms which are only open for 15 minutes over a period of eight hours. The display shows the opening times of the farms in 24 hour digital form and the amount you'll earn when you deliver each item - some produce earns more money than others. Only six farms display information at any one time - as you collect each item, another replaces it on the display.

At the end of each game, your score is added to the high score list. The other reward - a delightful touch - I'll leave you to discover for yourself!

"Time Trucker turns time telling into a challenging and rewarding game... and will help you develop the skills you need to make the most efficient use of your time by encouraging careful planning and quick decision-making." It's purposeful and enjoyable too. For a program involved with time and careful planning, I think it's unfortunate that all the planning has to be done at the computer. This may not be important in the home situation, but in school it is. An option to save a trucker's job sheet and recall it at a later stage would have been very useful for the printed map version. Nevertheless, some pleasing touches which will encourage even those who are not mathematically minded to work at it!

For a program involved with time and careful planning, I think it's unfortunate that all the planning has to be done at the computer.