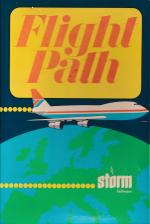 I find simulation programs to be among the most rewarding uses of the micro. What a long way they've come from the early Kingdom-type program! My first reaction when Flight Path landed on my desk was, "Not another flight simulation" - I'm not decrying them, because some are first rate programs, but there do seem to be quite a few around - so I was delighted to find that this was a program with a difference.

The program begins by offering several very useful options, which give it tremendous flexibility. Distances can be found using the computer or an atlas; airports selected by the users or the computer; and they can include wind effect and sound or not as they wish. The sound only operates during the actual flight, so it'll be a shame to miss it. The notes suggest that the program is suitable for 10-15 year olds, but I think some bright 8-9 years olds will thoroughly enjoy and benefit from using the program with the computer options.

The children take on the role of the airline captain and have to plan a flight between any two of twenty-one airports in Europe. They then have to decide on the aircraft best suited to their needs - Boeing 747, a Tristar or a Boeing 757 (not very British!). Their choice will depend on the number of passengers - random choice by the computer - and whether they want to make one or two stops en route in order to fill up he spare seats in the aircraft and earn additional revenue. This has to be offset against additional landing charges and final costs, and the possibility of incurring a fine for late arrival.

If the group use the computer's built-in measuring device to find the distance, an effective map of Europe with airports marked and an oval with the centre at the airport they are measuring from appears on the screen. This oval is increased or decreased by pressing > or < until the perimeter passes through or near the second airport and the distance is automatically recorded in the top left hand corner of the screen.

Bearings can also be calculated with the computer's help. A line pointing North on the map from the departure airport is turned - using the same keys - until it passes through or near the second airport. Again, the calculation appears in the top left hand corner of the screen. If the second airport is not the final destination, the process is repeated for the other legs of the journey. Of course, as an intermediate step to using the atlas option, the group could always make their calculations using a map and use the computer as a check, but a good map is essential as measurements have to be accurate to within 50km.

If the group decide to include the wind option - this really is quite a challenge for younger children - the flight details for each leg are shown and they are asked to choose an altitude to fly at (4, 6, 8 or 10 thousand metres) given wind speeds and directions. They are given the opportunity to follow an excellent tutorial on the effect of wind on an aircraft's course and speed and how to correct it. Course and speed correction tables are included with the handbook, and these are used to adjust the flight details.

For each leg of the flight, a section of the map is shown on the screen with the departure and destination airports marked. The engines start up - very effective sound effects - and a touch on the Spacebar sees the plane taking off and heading along its programmed course.

Accurate calculations ensure a perfect landing; if not, there will be a crash landing which involves a recovery fee. A balance sheet is shown for this leg of the flight, before the aircraft takes off again for the next destination - assuming there is one - and when the final destination is reached, a summary balance sheet is shown indicating the profit/loss made by the flight. Beware, bankruptcy is never far away for airlines!

The program is accompanied by a useful booklet, which gives an outline of the program, a topic web - teacher involvement in planning, a book list (what about other media?) and summary sheets which allow the children to keep a record of their flight. Section 6 states: "If you are careful, you will be able to calculate exactly how much income you will receive from the passengers. However, you must make sure that you base your calculations on the actual distance travelled by each passenger." I hate to admit it, but I had to ask Storm to come to my aid - calculations are based on £60 plus an additional £1 for every 50km travelled! - and they've promised to produce a fares matrix, which I'll include in this review if it arrives in time. I'm sure this will provide some useful additional mathematics work.

The one aspect of the program I didn't think was realistic was the crash landing. I can't imagine a jumbo crash landing near any city and being successfully recovered - for a nominal £900! Perhaps an occasional "disaster" as a result of some very bad calculations, but I would have thought being placed in a "holding" situation for a period of time - depending on the error - with additional fuel and time costs would be better in most instances.

I thoroughly enjoyed this program. It offers decision making, a wide range of skills and concepts, is presented in a very stimulating manner, and the options offered mean that it can be used effectively with a wide ability range - flying high!!

I thoroughly enjoyed this program. It offers decision making, a wide range of skills and concepts, is presented in a very stimulating manner, and the options offered mean that it can be used effectively with a wide ability range.