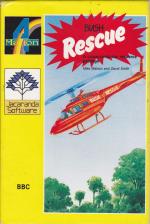 There will be many schools undertaking projects on Astralia in 1988, their bi-centennial year, and Bush Rescue will provide an interesting addition to the resources available for such a project. It's a collaborative effort between 4Mation and Jacaranda Software and much use has been made of electronic mail during its development - I often wondered what people did with it - besides passing rude messages! I've been using the Australian version for this review which, incidently, costs in excess of 50 percent more than the UK version will.

I found this fact quite interesting, especially as the presentation of the backup material in no way matches what I've come to expect from 4Mation - something they'll be improving upon before the UK version hits the market. The program is supplied on a flippy disc but, if you have access to a double disc drive, the handbook gives details about modifying it so that the two drives can be used, hence saving the need to swap discs.

In Bush Rescue, a camping trip to a national park has to be planned. This involves using timetables - watch for the 12 and 24 hour clocks! - calendars and Infotel to book trains, buses and the camp site. Infotel is based on Prestel and the Australian Viatel systems and provides as simple an introduction to the system as any I've seen. Once the camp site is reached, you become involved in helping to find and rescue an injured caver, later help navigate the rescue helicopter that takes the caver to hospital and finally you can produce a report for the local newspaper.

Before setting out on the rescue mission, you decide which of the three levels of difficulty you wish to use - the easier the level, the slower time passes and the fewer problems involved. The adventure is based on the Aussie topographical map (equivalent of our O.S. map) of the Caves Bay area - one full-colour version of the 1:25000 map and a photocopy master of the 1:35000 map are included in the backup material. Using the cardinal points of the compass and assisted by the screen-based descriptions of the area, you find your way around the map. At various points on the trails you find members of the lost party who may have information and/or important items of equipment, e.g. you may find the right cave but, unless you have the correct equipment you can't enter. Irrespective of the level of difficulty, everyone has to build a bridge across the river - a neat logic exercise in using various lengths of logs and negotiate mazes in the tea maze and the cave.

Having found the injured person, you then have to return to the camp in order to navigate the helicopter rescue team to the cave. When planning this two things must be kept in mind: the helicopter must fly directly over the mouth of the correct cave and return to the camping grounds, and at no time should it be more than 80 metres above the ground. Up to ten legs are allowed, with markers being placed at the end of each leg (flag icon) and the ruler and compass icon gives access to a distance/direction finder, with the actual measurements being shown in the top right hand corner of the screen.

When the rescue has been completed, you are expected to write a report for the local newspaper, and the program provides a newspaper format which automatically prints the heading, date, price and a picture. The report has to fit onto three screens. Before this, however, the sub-menu gives access to a summary of your adventure on 20 screens before allowing you to write your report or opt to return to the keyboard at a later time. An additional option is to be added to the UK version which enables the program to be transferred onto another disc so, if you're lucky enough to have access to another computer, the two activities can be going on at the same time.

Bush Rescue is a pleasing addition to 4Mation's excellent range of adventure programs. It has an interesting theme in its own right, which can form the basis of an exciting topic, or can be used as part of a larger topic on Australia, develops many important skills at a fairly high level and provides the busy teacher with numerous practical ideas for the classroom.

A pleasing addition to 4Mation's excellent range of adventure programs... It develops many important skills at a fairly high level and provides the busy teacher with numerous practical ideas for the classroom.
Logout