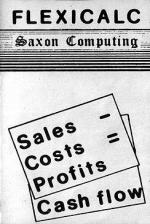 Flexicalc is basically what's called spreadsheet - a series of rows and columns into which you can enter numbers and text. The idea is you enter some numbers - like sales volumes - then define formulae by which you expect the numbers to change each month and it'll produce a projection of future sales. By changing the formula you can test out various theories such as 'at what point will I go bust'.

Flexicalc supports up to 80 columns of variable width. The only limit on the number of columns is the Spectrum's memory. A redefined character set is used to display up to 42 columns on the screen at any time.

Data entered in blocks can be of many types - numeric text, cash sums or different currencies. The difficult part is defining the formulae. which use the basic mathematical functions, constants, brackets and integrals, but cannot use more complex functions like RND.

You'll find Flexicalc hard to understand, even with the help of the manual which is prone to utterances like "if the next non-text line is another 'total' line, then the current level's total, in this case level two, is placed into the total line, added into the next level's total (ie level three) and zeroised". Wha...?

Competently programmed, but without being too dismissive, probably much more complex then most Spectrum owners could possibly desire.

A powerful number-crunching program which can also manipulate text like a mini word-processor.

Competently programmed, but without being too dismissive, probably much more complex then most Spectrum owners could possibly desire.