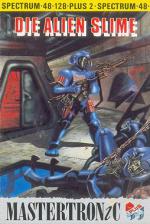 Some game titles just demand to be used. "Game Over" was one of them. "Better Dead Than Alien" was another. "Die Alien Slime" is the third, and possibly the best. The problem is that there's no guarantee that the game will match the marvellousness of the title, and that is indeed the case here name, shame about the program.

Die Alien Slime looks like several ideas tacked together. The main influence is Alien Syndrome - lots of complicated space stations seen in a top view, lots of swirling monsters, quite classy flip-screen techniques and plenty of colour. Unfortunately the graphic design doesn't quite make it; your heroic little spaceman looks a demented spider as he scuttles through the corridors, and the aliens range from pulsating black ellipses to floating cylinders; not half as exciting as the horrid blobs of Alien Syndrome. You can blast anything that moves with your super proton disruptor thingy (which seems to have the ability to shoot through walls), but they don't die a particularly spectacular death.

You might also notice bits of Impossible Mission hidden away in DAS; if you hope to destroy the aliens and clear out the many levels of the space station, you have to log on to the terminals located on each level. You then have the options to inventory the objects you have discovered and picked up; to deactivate the energy barriers which close off certain parts of the complex; to activate the transporter blocks which zap you directly from area to area; and to unlock security locks.

Of course, you have to have picked up the correct tokens to have the option do do any of these: the tokens lie about in a relaxed manner, conveniently labelled with the appropriate initials. Apart from that everything's very predictable, with a timer counting down to your inevitable doom if you fail to complete a level quickly enough, and an energy counter showing how much punishment you have taken from collision with aliens.

There are a few nice features, like the way in which your little man teeters on the edge of the catwalks, but since he can't actually fall off this doesn't add much to the gameplay. On the whole, then. Die Alien Slime is a bit of a waste of a good title. Considering the comments games players make when they get killed unexpectedly, I've always maintained that any game called "Oh S**t!" would go straight to the top of the charts.

Perhaps Mr Branson or one of his colleagues would like to pay me 10 for the use of this idea.

Some fast movement but not many good ideas in this Alien Syndrome lookalike.

Some fast movement but not many good ideas in this Alien Syndrome lookalike.