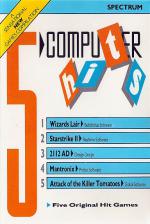 Five Computer Hits is yet another of those seemingly endless Beau Jolly compilations. There are, as the title suggests, five games, but did anyone actually say that they were games that you wanted to play? Wizards Lair is a bad rehash of Atic Atac, 2112AD is far too slow to be enjoyable, Matronix is pointless and Attack of the Killer Tomatoes is another run-of-the-mill filmation game. Starstrike II is its only redeeming feature and even that's a little slow.

My advice? Try bouncing bricks off your head it's far more fun.

A sad and frequently dull compilation. Only worth it for Starstrike II.

A sad and frequently dull compilation. Only worth it for Starstrike II.
Logout