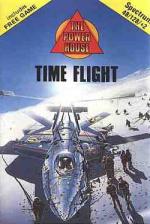 Welcome to my time machine. In it I will transport you back to the days when the BBC machine was in its heyday and when programs weren't very good.

Now after many years and for reasons which entirely escape me, one such game has been converted to the Squishboard in the guise of Timeflight. Written by Stephen Tatlock (he of Agent X fame), it places you in the position of a pilot lost in time who, by a series of time warps has to get back to his (or her) own time. The plane is shown by an overhead view and you have to collect letters to spell out the word WARP to get onto each next sheet.

Right, that's it. I can't write anymore. I really can't! To write more I'd have to play it again and if I play it again I'll go mad... maaaad!!!

Quite a step down from the illustrious Stephen Tat- lock's earlier Agent X. Avoid this one.

Quite a step down from the illustrious Stephen Tatlock's earlier Agent X. Avoid this one.