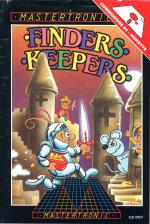 In times of old, when knights were bold and chivalry took priority in life over a tin opener for your suit of armour, proving yourself a man was the most important thing in life (things never change) although what you had to go through then was a little harder than today's untaxing rigmarole.

Taking the role of a knight in Mastertronic's latest release offers no exception, and proving your worthiness to join the esteemed Knights of the Polygon table plays a vital part in the game. You can, if you wish, be a callous and scoundrelous knave and not complete your task properly, but then you won't become a proper knight and you will lose the love of the girl you cherish (things never change).

The event leading up to your quest is an age-old problem, one still common today. Your liege, the King of Isbisma is stuck for a birthday present for his lush daughter Germintrude. Since you're a magical knight and quite a cool cookie, the king assigns you the task of getting something highly unusual for the gorgeous Princess. Before you can argue about it, you're spirited off to Spriteland to complete your quest.

What should you do now? If you're a good knight then you go about your quest without question, but on the other hand if you're a scoundrel, then you'll grab what you can get and try to escape the castle (and let the Princess down).

The game starts at the king's throne, with its incumbent imperiously waving you on your mission, and thence it's to Spriteland where lies fame and fortune, along with evil strength-sapping meanies and death.

The castle is essentially made up of platforms around which are dotted objects that can be picked up or examined. If you think an object may come in useful you can pick it up, trouble being that you can only carry a limited amount of things, so pick up objects with discretion. There are 'traders' at each end of the castle, and two on every level, and these people trade, buy or sell objects that you pick up. Some objects can be used in conjunction with others to make better and more valuable items. If you sell objects then the money raised from the sale is totalled up. Once this total reaches a required amount, you can buy something special for the Princess.

On exploring the castle you'll discover two huge 3D mazes. These have to be negotiated to reach other parts of the complex and there are holes and gates which have to be explored and examined to do so.

To thwart your present-seeking quest are the many meanies of Spriteland, creatures that roam the castle and, if you touch them, sap value from your energy bar. If the bar diminishes completely then you'll lose one of your five lives.

When you have enough money to buy a present, you can go for it or try to actually escape from the castle with lots of goodies and money, all for your very own selfish person... and be a really unchivalrous meanie (things never change).

I really don't know how Mastertronic can afford to market this game at such a ridiculously low price. If it was £8.95 I'd still shell out for it because it's that smart. The graphics are extremely good, with cartoon-like animation and truly humorous baddies. The game is challenging and has plenty of lastability.

I played the Spectrum version months ago when it came out. It had the distinction of being Mastertronic's first budget price without the budget look and feel. Now they have used the C64's capabilities to the full and made something which is more than a mere translation. Finders Keepers needs mapping and I'm sure the maps will start rolling in very quickly once it has been released (hint, hint). This is a little masterpiece and anyone willing to hand over the two quid for it will not be disappointed.

Yet another quality product from Mastertronic, enforcing their powerful hold on the budget range of games. Both graphics and sound are of a high standard, with some lovely characters and animation (the King in his chair is great). The music is also superb, with the SID chip being put to excellent use and there are some nifty sound effects spread throughout.

Finders Keepers may appear to be just a platform game on the surface, but after a little playing you soon find it isn't. There are some very good adventure overtones with plenty of objects around to pick up and trade or put to good use. Loads of locations exist to explore and 'suss', although mapping is not entirely essential as it is possible to learn your way round if played often enough (which is in fact the case).

I've been extremely impressed with Mastertronic previous arcade adventures on the C64, but this really does stand out. Definitely one for the collection and at the price it would be plain stupid to copy it and not fork out the cash.

What a mini masterpiece! As soon as this finishes loading, it bursts into life with superb tune and highly colourful graphics display. After listening to the tune a few times I thought it time to play and was really pleased to see that there is a game behind the title screen just as good as the music.

Although Finders Keepers is essentially a platform game (and me a usual anti-platformate!?) there is enough originality, puzzles and new kinds of gameplay to keep even the most jaded of anti-platformites extremely happy. The trading element is really great and some of the puzzles involved are devious and tricky.

The mazes are a difficult part of the game and I think that a little cartography wouldn't go amiss. The graphics are excellently drawn and genuinely cartoon-like, which makes the game fun to watch as well as play. I adored Finders Keepers and at its low budget price it is a game that no one can afford to overlook - it's a gem.

Presentation 86%
Definable keys and other such useful touches.

Sound 95%
Certainly some of the better sounds we've heard.

Hookability 91%
Plenty to see, do and work out.

Lastability 93%
...and two ways of finishing the game!

Value For Money 98%
Two quids is a joke!