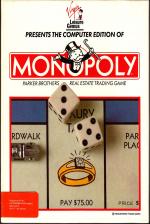 Those who like wheeling and dealing should take to Virgin's conversion of Deluxe Monopoly. All the board game's features are included and its rules are exactly the same: one to six players engage in a battle of property-buying and speculation in an attempt to become the richest person around.

Upon loading, the game permits any combination of human or computer players (with appropriate names and tokens) and provides a short game option. Choosing the short game allows the player to set a time limit on the speculating (in hours and minutes); again, the richest person at the end of this limit wins.

The screen is divided into three areas: running along the top is an options strip, the central section contains the board and the bottom section shows the game status in more detail.

Ten functions are accessed from the options strip with joystick or keys. From here the player quits or saves a game, toggles between displaying or hiding individual players' financial status, mortgages a property, views the property owners and rent values, buys and sells houses, trades with an opponent or throws the dice. Additionally, a fastmove option is available which speeds up movement from one location to another.

The central section displays the board in 3D, the player tokens, current player and value of the dice thrown; if the short game is chosen, the time remaining is also displayed. The computer controls most functions: throwing random numbers, acting as banker (extracting fines and paying bonuses) and actually moving the pieces.

The bottom section details the functions selected in the options strip. Normally it displays the four squares nearest to the player, the one currently occupied being highlighted on the left. If the player lands on any square other than a property plot, a message is displayed in the highlighted square; if he lands on a property square, the player is asked if he wants to buy it. If not, the property goes at auction to the highest bidder.

Houses are only placed on a property when a full set of plots are acquired. Buying property involves moving a cursor to the desired plot and placing each house individually. Trading properties adopts a similar selection method, but also includes cash transactions.

Although I'd rather play Monopoly with friends than on a computer, I have to admit that I was pleasantly surprised at how well put together this version of the game is.

The screen layout is tidy and all aspects of the original's gameplay is neatly presented with easily accessible menus. The computer is quick to exploit any errors on the player's part and I found it played a pretty merciless game.

Sometimes play can be a little too sluggish when you're in a hurry to get on, but at least this never becomes too unbearable, unlike the little jingles and sonic sequences, which accompany passing GO, going to jail and so on. Fans of the board game who are sick of playing against people who hide money in their socks shouldn't be disappointed, but at the price, it's doubtful whether anyone else would find it quite so appealing.

As board game conversions go, this is a good attempt. Little touches such as appealing spot effects when passing GO, landing on free parking or going to jail all add to the enjoyment, and the short game option is a brilliant idea carried over from the original conversion.

Unfortunately this is balanced against some clumsy selection methods: for example, if you want to put six houses on a set, you have to place them individually on each plot of land (as with the first Monopoly, this soon becomes annoying).

If there had been a few more cute touches and the game as a whole had been slightly more user-friendly, it would have been excellent, because it *is* the board game in all its aspects.

As it stands, it's colourful and playable, but whether or not you like the original will determine whether you like this.

Hookability 75%
It is Monopoly is all its aspects; if you like that, you'll warn to this.

Lastability 68%
The multiple player mode may not provide lasting interest, but the short game option should.

Overall 73%
Should appeal to fans of the game.

As board game conversions go, this is a good attempt... The multiple player mode may not provide lasting interest, but the short game option should.