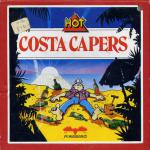 The strange saga of Ted Blewitt continues on from Hewson's Technician Ted in Firebird's Costa Capers.

With all the hard work that poor little prole Ted had to go through at the Chip Factory he's decided that it's time for a rest. Just like every other Trevor, Russell and Sharon, Ted plumps for a good time in sunny Spain on a package holiday. He's packed all the Items he needs for a really good time in the sun. Unluckily though, some nasty person has used five fingered discount to 'buy' all of Ted's luggage, including his camera. Gosh, the chaps at work would never believe that Ted had been off to Spain without a set of snaps to prove it. There's no way he's going to get to Spain anyway, without his passport and luggage.

The main problem about retrieving his lost property is that Ted finds himself in a very strange environment indeed. The inhabitants of the area are most peculiar types. Quite a few of the usually passive items of Ted's luggage have burst into dangerous animation, to make things worse. Ted has to retrieve his luggage, take 36 snapshots of the Iberian countryside and then get back home in time to start work again at the Chip Factory with all three dozen holiday pits duly developed.

Ted is jolly little character, looking exactly the same as he did in his last incarnation and he can move left and right and sproing into the air. The background Ted leaps about on is organised into screens and if Ted goes of the edge of a screen another flips into view. A status area underneath the main display section helps you keep track of the variables that playing Costa Capers requires you to juggle with. Four histograms represent Ted's intoxication level, hangover strength, degree of sunburn and energy level.

There's an awful lot of drink hanging around the place, and getting drunk is not as pointless and stupid as it is in real life: in Costa Capers having a quick razzle with a can of lager can actually be a bit of a benefit, providing the extra 'Dutch Courage' to get past a few of the normally impassable meanies.

Of course getting a bit wobbly legged does have its disadvantages one of them is losing the ability to walk properly. This is where the hangover meter comes in. Drinking lager does have one positive effect: cools Ted down during the day, stopping the sunburnometer from rising too high. Collecting a Parasol keeps the sun off his back. If you allow Ted to get too drunk, too sunburnt or give him too great a hangover, his performance suffers.

To complete Costa Capers you need to collect objects to enable you to collect other objects, that enable you to collect others... and so on ad inifinitum, well almost. A money meter shows how much loot Ted has collected and he needs money to buy back some of his property. Collecting certain artefacts can cause problems, as removing an item may have a strange effect in another place, 'due to some shift in the fabric of time in some other dimension'.

Up to eight objects can be carried at a time, and they are displayed in a scrolling window in the status area. If you drop an object in the path of a mobile nasty, it is lost for ever as the sprite steals it and refuses to hand it back until you start a new game. Time passes rapidly, and the game has to be completed so Ted can be back at work when the holiday fortnight ends. Rather than lose lives as a result of collisions with mobiles, Ted loses time each mini-death costs him an hour.

As platform games go, Costa Capers really is quite reasonable, though a little bit too difficult. It's also a bit too derivative as well - it's very nearly Technician Ted. It's a shame about the graphics since, unlike Technician Ted when it came out, they really do look a bit ancient. Still very impressive though, is the smoothness of all the characters jetting about the screen. Even though I like platform games I still found Costa Capers just a bit too hard to be enjoyable. Real pros may think differently.

I was expecting a real advance on Technician Ted with this one, and boy, was I wrong, if anything, it's a step backwards. The graphics are neat, and it's quite a good game, but there is so much potential unrealised, that it's a real disappointment. At the time, Technician Ted was the joint second highest game ever rated in CRASH, but I can't see Costa Capers repeating that feat. Some of the problems are quite difficult, but this serves to be frustrating rather than adding to the game. For the high price asked, I can't madly recommend Costa Capers, except to those who were mega-fans of the original.

I certainly wasn't expecting another Technician Ted when I loaded this game up, but that's what I got. This sort of game is fairly dated now, so why on earth have Firebird included Costa Capers in their new Hot Range? The graphics are about average for this type of game: your character is very small but adequately animated and the other characters are large and usually well detailed. The sound is fair but nothing to write home about. There are many nice touches included in this one, but they weren't enough to keep me playing. This game is so like many others and contains nothing I haven't seen before somewhere else. If you were mad keen on Technician Ted perhaps it will appeal to you, but there are loads of good arcade adventures around for much less than Costa Capers.

This game is so like many others and contains nothing I haven't seen before somewhere else.