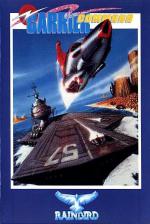 Carrier Command. It's big (big, big). So big in fact that those of you unfortunate enough not to have Speccy 128's won't be able to play it - 'cos it's not out on the smaller formats. Still, if this means you happen to be a masochist, then you're in the right place at the right time. Read on for a real sufferance session! There's no room to reproduce the rather weighty instruction and scenario booklet here, but I'll give you a precis of the telexed brief you (as commander of the Epsilon aircraft carrier) receive before the game begins.

'It has emerged that the aircraft carrier ACC Omega has been reprogrammed by the outlawed Stanza organisation. It's inevitable that it will attempt to invade the Gamma Base island chain.

"It's imperative that you take charge of the ACC Epsilon and put an end to this scheme.

"Your ship has been specially equipped with a newly programmed computer virus which will allow you to take command of any island which the Omega has already invaded.

"This, combined with state of the art Manta fighter and Walrus amphibious craft will shorten the odds in your favour.

"But remember, the Omega is also a highly developed aircraft carrier - and Stanza will stop at nothing to overtake this archipelago."

So that's the basic scenario. You're in charge of an aircraft carrier and all its onboard craft. Your aim is to gain control of the 32 islands that make up the archipelago and ultimately destroy Omega, the rogue carrier. Piece of porridge? Not on your nelly chum. When I said this game was big, I didn't mean just in the size of the playing area - I meant in all aspects. There's so much to do - and it's all in solid-filled 3D. Yahoo!

Now, if you're a 'left/right/up/down/fire' sort of cove you're going to find yourself beached for a few minutes at start of play - this whole game is icon controlled, and you really need to give it a little bit of thought (only to begin with though, let me stress, 'cos very soon you'll find all the icon switching becomes second nature). Mind you, you can always switch to manual control of a Manta (aircraft) and just fly around (using the joystick) looking at the scenery and taking potshots - but sooner or later you're going to have to come back in, land, and get around to the task in hand.

Oh, the task in hand.

As you already know, you've got to 'liberate' the 32 islands - but just how do you go about it? Stick around and I'll tell you. Actually no, I won't. [Yes, you will - Ed] Okay. Here goes.

The Base island is where your carrier is initially anchored when the conflict breaks out (at the start of the game). It's very important to you as it's from here that you build up the Resource Network (sort of shipping lines between islands) which serves your carrier and other forces throughout the battle. This Base island has a Command Centre along with some defensive forces and a runway. It's capable of producing resources and equipment itself, but not as efficiently as the 'specialist' Resource and Factory islands. (See next paragraph.)

Hello. That was quick. Right, Resource and Factory islands. Resource islands are constructed by planting Resource ACCB's (Automatic Command Centre Builders) on unoccupied islands. Once the Command Centre has been built, it then goes on to construct mines. rigs, fuel dumps and ancilliary buildings to store the mined raw materials. These raw resources are then shipped to Factory islands.

Factory islands are constructed by planting Factory ACCB's on unoccupied islands. Once the Command Centre has been built it then constructs factories to manufacture equipment and refine fuel for the carriers forces. Up to three factories can be constructed (depending on the island's physical size).

Defence islands are a different kettle of fish altogether in the sense that they don't actually produce anything to help your war effort. What they do do however is construct all manner of weaponry which will automatically home in on any enemy forces who get too close. This means that it's a good idea to have a band of defence islands protecting the non-defence islands.

To populate an island in the first place, you have to get to it and land. Lucky for you then that your Carrier contains six Walruses (amphibious tank type craft) and six Mantas (aircraft). These craft can be given co-ordinates (and lots of juicy weapons) and sent off on their own to 'do your bidding', or you can select 'total control' and float, trundle about or fly to your heart's content with the view of the outside world seen as if through the cockpit window.

All the time you're setting up your island resource network, guess what the dreaded Omega carrier is up to? The same thing as you by jiminey, that's what, but at the other end of the archipelago. Build up enough strength though, and you might be able to invade its islands and take some of them over. Build up even more strength and you might find yourself ready for an all out attack on the carrier itself. It's your decision - you might get yourself killed. I'd personally stay far out at sea and relax with a mug of cocoa - but that's just the 'devil-may-care' sort of chap I am.

Carrier Command is basically the biggest, bestest strategic shoot 'em up ever to appear on the Speccy. Most people said it could never be converted from the original 16-bit format, but it's here (in glorious monochrome) to prove them all wrong. The animation is great, and so is the gameplay. It'll have you glued to your keyboards and joysticks for months - I guarantee it. (But don't forget to give the manual a good read before you start!) Me? I'm off to the Speccy to do some more icon jiggling.

An action packed solid-filled 3D strategic shoot 'em up that 'they' said could never be successfully converted down to the Spectrum - except that it has! Astoundingly brilliant stuff!

An action packed solid-filled 3D strategic shoot 'em up that 'they' said could never be successfully converted down to the Spectrum - except that it has!