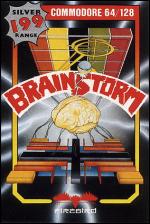 The objective is to trap one or two moving balls on the red part of a coloured grid with a combination of three coloured lines.

The game consists of 26 single screens and five colours: black and blue have no effect on the ball(s), red increases the score, magenta decreases it and green warps the ball randomly to another part of the grid. From the title screen the player starts on any five of the screens and has the option of three skill levels: these allow two or three lives to capture one ball or three to trap two balls.

The screen displays the playing area and an information panel, which details the current screen, scores, timer (counting down from 400), line colour and bonus switch (which doubles the scoring rate). To progress to the next screen, the player's present finishing score must be greater than the finishing score on the previous screen; otherwise, the game ends.

Like Zolyx, the concept is both very simple and fiendishly addictive: trapping a bouncing ball with three lines *sounds* easy, but it becomes incredibly hard on later screens.

The graphics and sound are only functional: what exists is just game - and it's amazing! The whole program is designed to create a state of maximum panic at the worst moments: the slowness of drawing lines, the timer and the warp blocks make a brilliant combination.

It's a superb budget puzzle game: buy it today!

Good puzzle games aren't scarce on the Commodore, but now they're in an even greater abundance. What makes this rank alongside the likes of Zenji and Zolyx are its incredible simplicity and the perfect blend of demands it makes on reflexes, co-ordination and brainwork.

The delay before a line catches up with the pointer means the player has to be constantly thinking ahead, and very carefully he has to think too!

There's nothing more maddening than constructing a trap for the ball then running out of line so that it escapes through the tiniest of gaps. Brainstorm is 26 screens of threats to your sanity - you'd have to be already crazy to miss out on it.

Presentation 89%
Three difficulty levels, high score table, and the option to begin on any five of the 26 screens.

Hookability 90%
Its infuriating simplicity makes it easy to pick up and impossible to put down.

Overall 94%
An immediately compelling and fiendishly addictive addition to the puzzle genre.

An immediately compelling and fiendishly addictive addition to the puzzle genre.