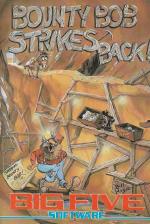 The Son Of Bounty Bob

Like some of the good films, and most of the bad ones, Bounty Bob is back in a sequel. Bounty Bob Strikes Back is what can only be described as a glorified platforms and ladders game. The cover notes describe, in amusing detail, the history of Bounty Bob's situation and surroundings and add complexity to it all but the bottom line (as they say in the country of this game's origin) is that this is not a very inspired or inspiring game.

Among the platforms and ladders are all kinds of lifts, slides, suction tubes, and, of course, several species of nasties. You have to steer Bounty Bob around the whole screen to lay claim to every square inch of level surface, before moving on to the next screen.

Obviously situated somewhere in the mining area around Chernobyl (or maybe even Sellafield), all the caves are teeming with radioactivity and 'mutant organisms' abound. Rather strangely, Bounty Bob can be temporarily rendered immune to their lethal touch, and knock them off on contact, by eating radioactive bits and pieces left lying around by the previous tenant, Nuclear Ned.

For all this background colour, the game ends up being rather dull when it comes to actually playing it. If this is a prime example of US Gold's "all-American software", then I would suggest it remains all in America.

I wouldn't mind parting with a fiver for this kind of program - after all, it is fast and smooth and diverting for a while - but ten quid is a bit steep.

Other BBC Model B Game Reviews By Geoff Bains

For all of its background colour, the game ends up being rather dull when it comes to actually playing it.