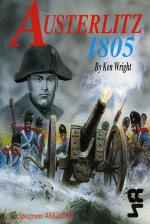 Austerlitz 1805 (as distinct from Austerlitz 1963, which was a different kettle of fish altogether) is a 1:50000ish scale replica of a battle that took place in said year between the Austro-Russian army led by Kutosov (home) and the French under Napoleon (away). The French won originally, thanks largely to Napoleon's expertise and the inefficiency of his opponents, but here's your chance to change all that.

Austerlitz is another Ken Wright wargame, and is constructed in essentially the same way as all his other stuff. A scrolling window onto the battlefield fills most of the screen and a system of menus is tucked in at the bottom. The units which make up each of the seven divisions under your control (whether you've decided to play Napoleon or Kutosov) are moved by setting targets for them to head for. You can also choose the formation you want them to move in, depending on whether you expect them to get any hassle on the way.

That's all you have to do really on the physical side of things. The rest of it is all down to keeping an eye on the morale and size of each unit. If you try sending a diminished, highly peeved unit into battle they're likely to down tools and head for home. Your best option in this case is either to disband them or amalgamate them with other units.

I found my best successes were achieved by trying to split up the enemy and get them to retreat. The only snag then is that your heavy artillery tends to get left behind, being rather sluggish, so when you finally get the baddies cornered you haven't got much to smash them up with.

The only thing that rather disappointed me was the victory condition - simply that one army is reduced to less than 40,000 men. At one point I seemed to have the Russians on the run, with my forces nicely placed to finish them off with the minimum of fuss, when I was told that there had been a decisive Russian victory.

It's hard to say anything else that hasn't been said before. Austerlitz is of the same high standard as the rest of the author's material. It's tough to beat (I haven't yet, needless to say) and three skill levels make it suitable for just about anyone (except, apparently, me) once they've worked out what all the little flashing squares and letters mean. Nice one, Ken.

Dedicated wargamers will lap this one up, and others might do well to try it too.

Dedicated wargamers will lap this one up, and others might do well to try it too.