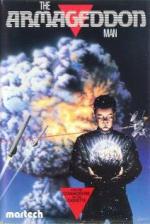 Strategy is back! Don't ask me why - but suddenly strategy games are all in fashion.

One of the first releases of what is promising to be a flood of Star Wars SDI influenced games is Armageddon Man from Martech.

Imagine playing the parts of Reagan, Thatcher, Gadhaffi, Gorbachev, Gandhi and a cast of thousands, all at the same time.

Now imagine that you have to act for each of those Heads of State, with complete impartiality, making decisions for them, without being biased towards one country. Providing everyone with enough food, technology and armaments to keep them feeling secure. Prevent the stronger countries from making too many demands on the weaker ones. And prevent a full scale nuclear war.

In a nutshell, Armageddon Man gives you your first (and probably only) chance at playing God.

You've been appointed Supreme Commander of the United Nuclear Nations, it's up to you to maintain peace and harmony between the sixteen states, and stability within the 240 countries which make up those states.

You must maintain a good working relationship with each state You must promote good relations between each of the states themselves. You must achieve economic stability and maintain it.

Obviously no easy task. Your appointment lasts for a year, regular weekly progress reports will be given throughout the course of the game. You begin with a smart map of the world, a full complement of satellites and spying equipment, and what is commonly termed an "on-going situation".

Armageddon Man works rather like an icon-driven adventure. At the start it's up to you to deploy your satellites in sensible positions. You have three 'Big Bird' satellites and six SDI satellites. Big Birds are used to spy on the area directly underneath them and they relay messages to you as to what the country beneath them is up to. SDI satellites are used in the event of a nuclear attack and are capable of trapping some of the missiles, and preventing them from reaching their targets.

It makes sense therefore, to place the Big Birds in an area that is likely to cause trouble and needs careful watching, and to place SDI satellites near either known missiles bases or near important targets.

SDI satellites are only useful in small-scale wars. If the Big One does break out, there's nothing you can do to prevent world-wide destruction.

Once the satellites are in position, you're in control. Regular memos flash on to the screen informing you of world events. Some are a little dull - China have a cultural exchange with Libya. Others are pretty heavy - a full-scale war has broken out between America and the USSR.

Each time a memo flashes up, you'll have a choice of what to do. You choose between agreeing or disagreeing with the action, supporting it, criticising it, or ignoring it.

However, if you choose to ignore an event, make sure you have a good reason for doing so. Forget about what seems to be a minor event, and you would well find yourself being caught out later on.

You can also send letters out. Should you decide to do so, move the cursor over the Out tray, and press Fire. A standard list of letters will flash up. Insert the country/countries name, and a complete letter will show on screen. You can then choose whether to send the letter.

You'll have to think fast. It's all real-time and while you're dithering about wondering whether or not China's request that the Americans give them ten tonnes of food is reasonable or not, the Libyans could invading Algeria. (Unlikely, but don't discount the possibility).

Best thing about the game is you get a free shiny poster-map of the world, and a set of re-usable flags for each of the States. By using the stickers to remind yourself who likes who and who hates who's guts, you have a slightly better chance of keeping up with current affairs.

After only four weeks as Supreme Controller, despite several letters of confidence from the European Unite, my record was described as 'Very Poor', and many were howling for my resignation.

At times like these, it feels as though Armageddon is just around the corner, and the temptation to deliberately bring it about gets too much to cope with, and naughtiness creeps in. Missiles start to fly, and the term Goodnight Saigon comes in to play. I destroyed Australia at my first attempt. No more Fosters for us.

Armageddon Man is almost frighteningly absorbing, although I'm not sure that I could make it through fifty-two weeks without getting a little frustrated. Madness would undoubtedly creep in. Keeping the world ticking over has to the ultimate in strategy play.

Absorbing strategy game. Choose whether to save the earth or cause all out war just for the hell of it.

Absorbing strategy game. Choose whether to save the earth or cause all out war just for the hell of it.