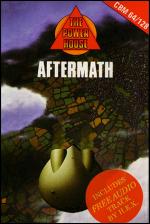 Saurans Rule OK! Oh no they don't... there's still one stubborn fighter pilot who won't accept defeat - there's always one, isn't there? This particular pilot is suffering from severe megalomania, and has decided to pit his fleet of three airborne assault vehicles against the entire Sauran invasion fleet.

The action takes place over a horizontally scrolling backdrop. Your ship sits at the bottom of the screen and is manoeuvrable within the entire screen area. Sauran craft emergy from the top of the screen and fly downwards, spitting deadly laser fire. Contact with either ship or shot spells doom, and one of the fleet becomes history. However, your craft has an offensive enemy - killing them instantly if a hit strikes home.

Ground targets are destroyed by bombing - line up the crosshairs at the front of the space fighter, pull back on the joystick and press the fire button to send a deadly incendiary device hurtling towards the ground. The majority of ground installations are harmless, but occasionally one may spit a missile in your general direction.

The Sauran craft become more and more aggressive as the mission progresses. It's not all bad news though - an extra life is earned for every 2,000 points scored.

As Xevious was my all-time favourite arcade game, I am always keen to see any clones. Unfortunately, Aftermath is dire. The movement of the main ship is very slow, while the aliens happily whizz around at top speed. This makes play decidedly annoying, as you can easily respond to approaching ships, but you can't move fast enough to avoid the oncoming doom.

The whole shooting match is graphically uninteresting - the backgrounds and sprites are quite detailed but basically uninspiring. Even at two quid I can't really see anybody being too thrilled over this.

And what seems like the millionth Xevious clone vertically scrolls its way into my life... and straight out again without making any sort of impact.

There's no variety - shooting the aliens as they come down the screen is all there is to it. It wouldn't be so bad if the alien attack patterns differed from screen to screen, but they don't, and it all becomes very predictable after a few goes.

The long waits which have to be endured before play begins only add frustration to the tedium; when you die, watching 'GAME OVER' scroll slowly down the screen is infuriating. If you see this on the shelf, just scroll on.

Presentation 71%
A simple title screen and a comprehensive series of options, but some annoying delays during play.

Sound 19%
The few nauseous spot effects fail to do their job.

Lastability 19%
Severely lacking variety and excitement - and any addictive qualities.

Value For Money 38%
One of the cheapest vertically scrolling shoot-'em-ups around.

Overall 27%
Another mediocre addition to the fastest growing genre this side of the Indian Ocean.

Another mediocre addition to the fastest growing genre this side of the Indian Ocean.