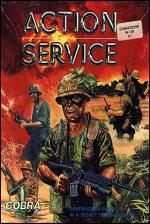 It's always the same, isn't it? Off you go, on a nice military coup somewhere in the Pacific. No worries - weather's marvellous, beer's cheap, locals are friendly.

Then the fighting bit comes round, someone mucks the job up and you've all got to go back home to the nasty cold climate, with your drill sergeant bawling at you for another six months.

So what happens to that unlucky GI who caused the bother in the first place? No, you don't all beat him repeatedly about the head and neck - you send him back to school. But this is no ordinary school. No sir, it's the Commando Training School.

After kitting yourself out (nice shaven head, Doc Martens, etc) it's straight down to the training course for some of the meanest workouts a guy will ever have to face. Clamber over eight foot walls, traverse minefields, dodge machine-gun fire, leap tall buildings in a single bound (well, perhaps not!) and avoid ferocious alsatians in this test to find the toughest of the tough, the bravest of the brave, and the most brain-deficient of the mentally unstable.

In addition to basic running mode, different events call for diving (among other things) grenade throwing, kneeling, ladder climbing, jumping, pushups, crawling and dodging. And if you're not reaching for the Ralgex and shouting out 'mother' at the end of all that, you can rest easy in the knowledge that you're the hardest bloke around. Either that, or you've died of exhaustion.

Anyway, if you find the going a little too rough (and the sergeant isn't looking)... well, you can always cheat a bit and rearrange the whole course using the built-in construction set. That way you get to pick your own obstacles, decorate the landscape, position the height of your soldier in relation to the landscape and set your own traps.

Afterwards, watch exactly how you made a mess of it by rewinding the action on the video screen and setting play in motion.

It's a bad world out there. Make sure you're daft enough to enter it. Train now, in Action Service!

Any fans of Combat Zone and 19 who are looking for (yet) another army game to add to their collection, stop jumping up and down and getting excited right now - you're in for a disappointment.

Unless you've got the sort of warped sense of humour that actually enjoys laughing at blocky, badly animated and incredibly slo-o-ow graphics, that is. Oh yeah - and if you really want to get your teeth into a bit of decent gameplay, forget it 'cos this isn't it.

Action?! Boring, expetitive and extremely tedious joystick wiggling, more like. Do yourself a favour and give this a miss.

This is very much like the first level of 19, except that the whole game is the same and there are a few extra additions - like people to kick in and shoot and wire thingies to swing across.

Everything happens so slowly though, it's as if the soldier's running through thick mud all the time.

It doesn't look very snappy either. The sprites are blocky, and jerk about in a most undignified way; the backgrounds are bare, but the different obstacles are passable.

Sound effects add little to the game's atmosphere, consisting of nothing more than simple white noise.

The construction kit is a good idea and, had it been faster, might have amounted to a decent addition to the game. As it stands though, no thank you.

Dear oh dear oh dear... As if people aren't already cheesed off with silly army games, here's another one to get all hot and bothered about. I was hard pressed to find the action mentioned in the game's title for a start. Everything moves at a snail's pace - if this is really what the army's like, lounge lizards like Maff should have no trouble fitting in!

The blurb on the back of the box enthuses about 'lifelife graphics with superb sound and speech' but the game itself boasts unsteady sprites (Perhaps they had a Stella too many at the bar the other night!) with crunchy white noise effects... and zilch as far as speech is concerned!

Not a product I'd do National Service for.

Presentation 78%
Construction kit and video playback modes. The French manual has been poorly translated into English.

Sound 37%
Unrealistic white noise effects and no speech - whatever the box says!

Lastability 43%
When the game becomes boring (which it does quickly), there's always the construction kit to mess around with.

Overall 44%
Not one of the better army training efforts on the market.

Not one of the better army training efforts on the market.