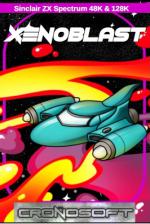 I believe Cronosoft published its first physical release for the Spectrum in 2002 so Xenoblast marks an incredible twenty years that it's served the Spectrum community. Xenoblast is a monochrome shoot-'em-up - yes, another one! - for the Spectrum 48K/128K and is one of those vertically scrolling affairs where you move up the screen and not only have to avoid enemy spaceships, but also have to avoid tall buildings.

It's the pretty standard left, right, up, down, fire affair and the nasties usually bite the dust if hit with a single shot from your craft. You can also shoot their bullets out of the air... but for some inexplicable reason bullets take two shots to destroy. Surely it should have been the other way around? When you get to the top of the screen there's a Big Boss Battle which consists of a ball of light that moves in a pre-determined pattern across the top of the screen. You try to create a vertical wall of bullets that he will have to pass through and - yawn - you then hammer the fire button continually until he floats into it enough times that you proceed to the next level.

The gameplay isn't too demanding - it's a shoot-'em-up, after all. The main problem is that, while the scrolling is smooth, the craft reacts to your controls in a jerky fashion. This can be especially aggravating when you need to navigate through narrow passageways, as the craft constantly goes a few pixels further than you want it to. After you've blasted the Big Boss you have to find your way to what looks like a radio antennae, and usually this means carefully picking your way through the scenery to get to it - the scrolling helpfully stops for this last part of your mission, which definitely makes it more likely you'll get there!

Apart from a smart bomb that clears all enemies on-screen, there's nothing particularly special about this release. Cronosoft have always tended to market 'budget' software, but there have been a few surprisingly triple-A releases from them before (Egghead Round The Med, for example) and so I am always hopeful that they might have struck gold again. Unfortunately, not this time. While Xenoblast is a competent blaster, it's not particularly addictive. Even the level design is pretty unimaginative, and the fact the Big Boss is exactly the same on each level makes it all feel very repetitive.

The graphics are ok, and the additional tunes on the 128K version are full of life (although you will have to just sit there with either the menu screen or the game over one displayed to hear them). There's no in-game music and you only get three lives.

I suppose if you're a shoot-'em-up fan, you could do worse.

While Xenoblast is a competent blaster, it's not particularly addictive. The level design is pretty unimaginative, and the fact the Big Boss is exactly the same on each level makes it all feel very repetitive.