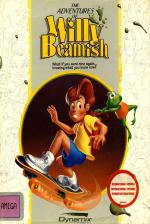 Willy Beamish | It's A Man's, Man's World | The Comic Doesn't Stand Up | The Bottom Line 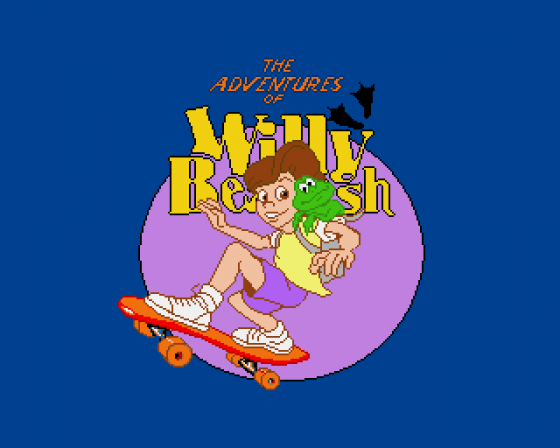 The game begins with Willy's frog causing a bit of commotion in school assembly - the last of the school year. From here we see Willy daydreaming about playing in the 'Nintari' Games Championship (Nintari - Nintendo mixed with Atari - clever, eh? Well, maybe not). His fantasy soon dissolves in a puff of smoke, though, and the realisation hits that he's actually sitting in the class, with the witch-like teacher staring down at him. Teacher explains that this is the last lesson of the school year, and that the report cards have been posted to all the kids' parents - it's at this point that you can be forgiven for complaining, quite loudly, that, hey, we're five minutes into gametime, and we haven't actually been given the chance to do anything yet! Thankfully this intro of David Lean proportions can be skipped, but... 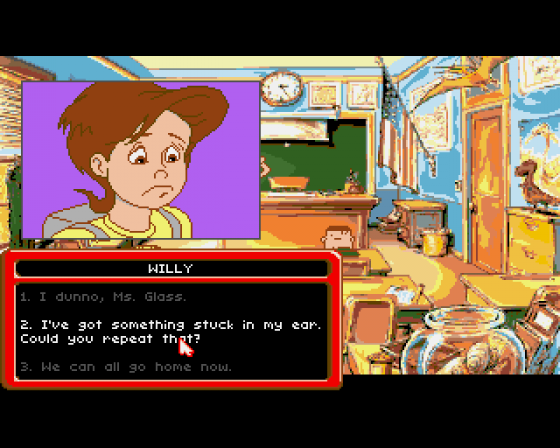 Into the game, and the structure is similiar(ish) to Hearts Of China, which means that the bits of 'action' are divided by little bits where the player gets to select a possible action or choose an answer to a question. Movement is achieved by moving the cursor around - if it transforms into an arrow, then Willy can move in that direction. If not, it's tough. The conversation bits are pretty rudimentary, usually no more than three possible answers are available. More often than not selecting the inappropriate answer will result in Willy being sent off to Military Academy (Bill & Ted, anyone?) i.e. Game Over. This limited form of control and interaction is frustrating to say the least. There's practically no freedom of movement (one of the most important ingredients to an adventure) and any deviation it does allow from the correct path to completion might be fun, but sure doesn't get you any further.

Willy Beamish does have good points though. The graphics are pretty snazzy, with watercolour-style backgrounds - all unfinished lines and carefree dabs of colour. The sprites perhaps look a little too simple by contrast, but they move pretty well. And the cameo pics of the people actually do have quite a bit of character (much like the nurse's 'top heavy' uniform, which seems to have a life all of its own).

Willy's mum is particularly well, um, realised. Call me a sexist (the girls in the office do anyway), but it's not hard to forget about the little brat, and concentrate much more on the irresistibly cute parent. Hey, nice belly button! Willy's kid sister also proved kind of fun. Demanding to be pushed ever higher on the swing, it's hard not to succumb to her wishes. Hey, kid, you want to go really high? Hee, hee, hee. These little (ahem) 'high points' really show just what can be done with the scenario and game structure. It's just a pity that the plotting wasn't a little 'tighter', and more freedom made available at each stage. 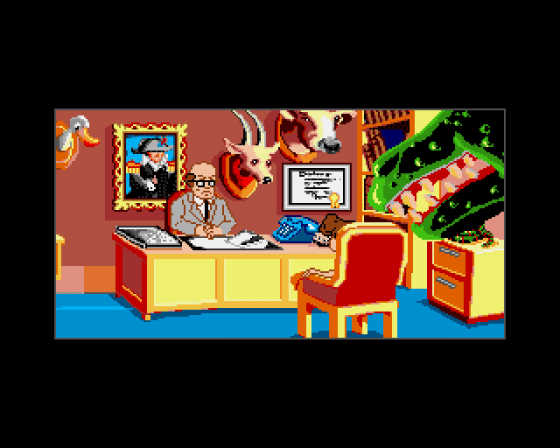 I guess the best comparison is along the lines that if Hearts Of China is one of those posh Eagle picture stories, then Willy Beamish is a good old-fashioned cartoon strip - and as such could easily be the more successful of the two.

The story isn't bad, the characters are neat, and the cartoon graphics work well. It's just the one-dimensional nature of the gameplay which lets things down. I know it's supposed to be like playing a comic, but that doesn't mean that the plot has to be so linear. More 'pathways' would have bolstered the longevity tenfold.

As it stands it plays almost like a straight strip, with just the one plot. The result is that deviations from the pre-determined plot are so minor as to be unnoticeable, character interaction is similarly down to pre-programming, and once it's been seen once, there's no need to ever play it again. In this sense it's going to suffer comparisons with - of all things - Space Ace 2!

To sum up then, it's a nice try, but the result is just far too limited. I hear that they're currently working on Willy Beamish 2 - maybe that one will up the level of interactiveness a bit, because as it stands the game system used in Willy Beamish is just way too simple. Hmmm. I never liked kids anyway.

Uppers: The humour, graphics, plot and speed are a huge improvement on Larry 5. For adults, the chance to go back to childhood and misbehave is (not surprisingly) jolly good fun.

Downers: It's all so damned linear, and actually getting to do anything evil usually results in 'game over' (something that Sierra seem to resort to all too often). The interaction is rather limited too.

Not as engrossing or flexible as Hearts Of China. One for the younger player (but how many of them have access to one meg Amigas with hard drives?). Kind of fun, but at £35 quid a throw you really want a bit more. I guess it's just better suited to the PC really.

Willy Beamish | It's A Man's, Man's World | The Comic Doesn't Stand Up | The Bottom Line

For adults, the chance to go back to childhood and misbehave is (not surprisingly) jolly good fun. However, the interaction is rather limited. 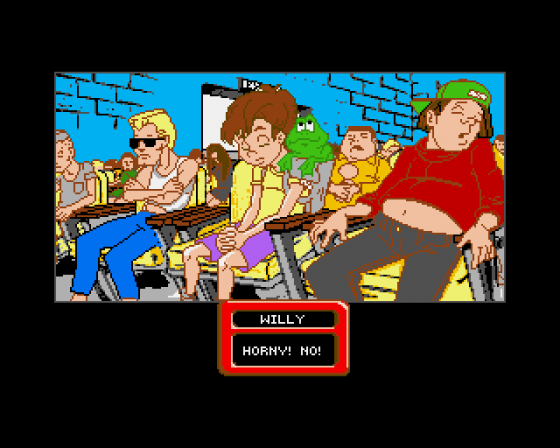 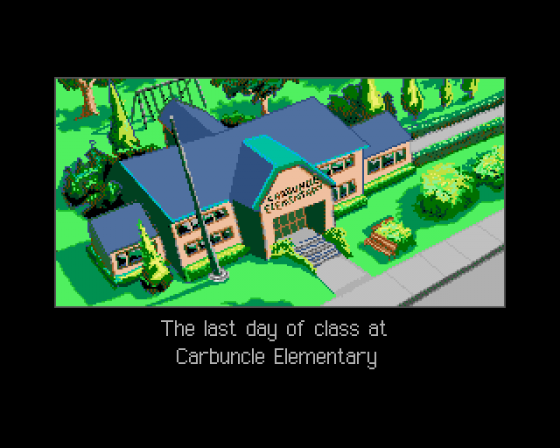 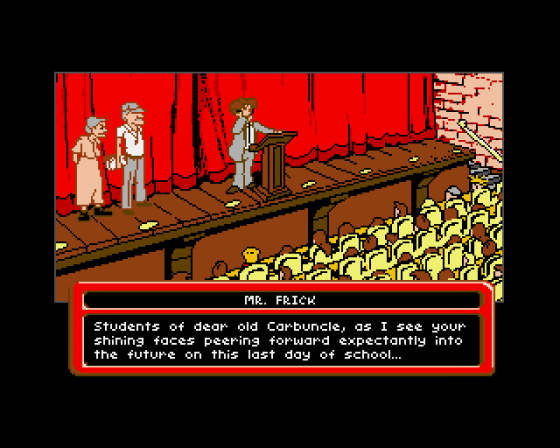 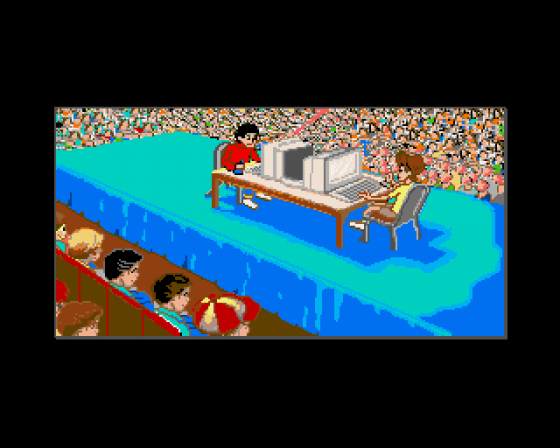 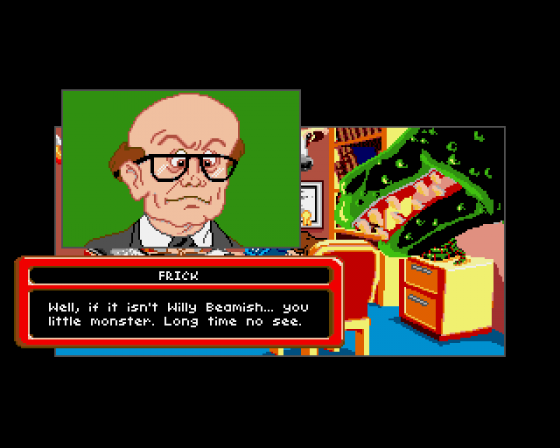