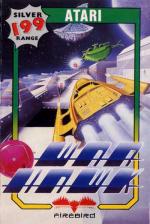 The opening screen and music promise a little more than this program actually delivers, although I have to say the game is extremely addictive.

The music is absolutely fantastic, another masterpiece from composer, Rob Hubbard. This alone is worth two quid and twelve minutes loading time!

I also like the amount of depth Firebird has managed to get into the title screen.

The game itself is a fairly simple idea, and has been used before, in Xevious. You fly over the top of an asteroid, your task being to blow up as many installations as possible.

At first sight you begin to wonder what it is you are supposed to be shooting at, but after a few minutes playing you soon learn.

To hinder your progress a few squadrons of enemy fighters are thrown up. Some of these you can shoot down, some you can't.

They don't actually shoot at you, but colliding with them, or with mines laid by them, will deplete your energy supply.

When you reach the end of each level of the game you are assaulted, from all directions, by hordes of enemy ships and mines.

Dodge these or shoot them as best you can, as you could still run out of energy before the end of the session. You can move around the screen, but this doesn't help you much as the enemy ships are very fast - and anyway you have to destroy the ground bases to accumulate a good score.

Use a joystick with an automatic firing capability so that you can spend more time dodging enemy ships and mines.

If you want to pause the game, the Select key will pause, and the Start key release it. This isn't mentioned in the instructions.

This would have been a great game had it been done in 3D, like the cover shows. Sadly, it's in 2D, so Warhawk must have some kind of terrain following radar, as you can't crash into buildings, although your missiles can blow up both ground bases and enemy ships.