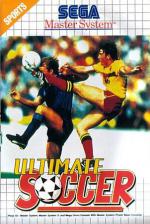 At last, a game has come to the Master System that incorporates nearly everything you'd ever want in a footy simulation. Most soccer games around at the moment leave a lot to be desired in the playability, originality and presentation stakes, but all that will change with the release of Ultimate Soccer - promise.

There are the now-standard footballing options, enabling you to play the computer or challenge a friend in friendly match, compete in the tricky World League, play the even trickier Ultimate Cup competition with 64 teams or, for the novice, get to grips with penalty kicks against the computer or a friend.

As the teams are based on their real-life counterparts, they have individual strengths and weaknesses in particular areas of play, so there's always going to be favourite (and least favourite) teams.

Apart from the useful formation control, it's possible to select a 'Style of Play'. The tactical emphasis given by Normal, Attack and Defend is obvious; Open Play allows the team to attack whenever they have the ball; in Breakaway, all attackers make a move when their team are in possession, otherwise they stay as they are; and finally there's Cautious style, where the entire team are defensive unless they have the ball.

Players are controlled by one button but there are certain tricks to perform - curls on corner kicks and other sly moves are possible thanks to aftertouch.

Pitch surface, wind strength, game speed, difficulty, backpass rules, player change and in-game radar are among the other options you can select to suit your taste. You can't beat a half-time orange, though!

I've always been a firm believer that football should be confined to the pitch and kept well away from television and consoles. Why sit around the house playing or watching it onscreen when you can be booting the ball about yourself? Of course, I make the odd exception - Cup Final day, for example. Ultimate Soccer from Sega is another one. It's fantastic!

From the moment you switch on the Master System, you know you're in for something special. The slick presentation shines out from all corners of the game. There's even a tiny animated Sonic on the many menu screens - he wiggles his finger at you!

The soccer itself is fast and furious. The players are small but perfectly detailed and animated. The pitch scrolls smoothly and it's easy to get into the swing of the action, whether you play solo versus one of the many teams or in a two-player challenge.

Of course, with games like this, it's the two-player option that makes it all worthwhile. As soon as Ultimate Soccer came into the office, everyone gathered around the console, cheering for their team. We just couldn't get enough of it!

Football has been attempted on the Master System before, but never with the success of Ultimate Soccer. If there's only one footy game in your cart collection - this should be it! 92%

Football games have come a long way since those humble days of the first consoles, where a dot was manipulated around a black screen by a few larger dots. In Ultimate Soccer, the only dots you see are the ones before your eyes after you've played it too much!

This is the best example of a well devised, feature-packed football game. With over 60 teams to choose from, all of which are based on real life football clubs and have their own strengths and weaknesses, it could take years to play every combination.

It's hard to imagine Ultimate Soccer has many limitations. Everything about it is almost perfect; the most important part of any football sim, dribbling, is a cinch.

Graphically, it's far superior to other MS footy games. The players are small but nicely detailed and coloured. The trouble is, a few teams have green tops, which don't show up well against the pitch. Footy sims were never musically inspired but good spot effects add a finishing touch to this near-faultless game. 88%

If there's only one soccer game in your collection, this should be it!