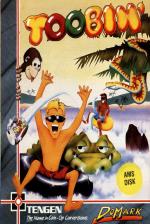 Paddle down the Amazon on an inflated innertube, but be sure to avoid the crocs, punks, swamp monsters and kamikazi penguins. 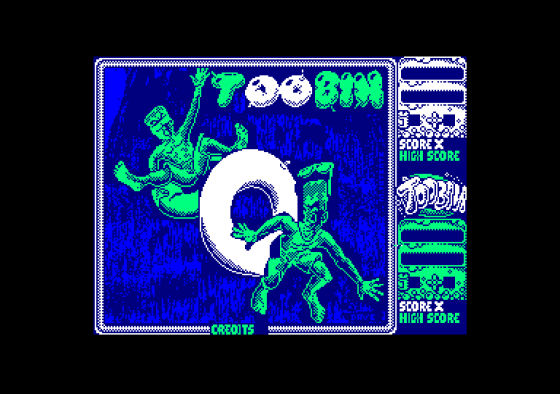 Paddle down the Amazon on an inflated innertube, but be sure to avoid the crocs, punks, swamp monsters and kamikazi penguins.

How often have you sat in your bath and dreamed of paddling through rocks and rapids in a large inner-tube? Many a time I have sat staring at the soap and imagining it was a crocodile and that I was desperately paddling away across the rapids. The latest coin-op conversion from Tengen offers the prospective rider of the waves a chance to fulfil these dreams and fight off the terrors of some of the worst rivers in and out of this world.

Toobin is a game designed to test the nerve of the best toobers around. Floating and paddling through treacherous waters, it is your job to collect the tin cans that litter the river as ammunition against the alligators and deadly weeds that get in your way. Just when you think it all sounds a little easy, punks, fly fishermen, swamp monsters and kamikaze penguins line the banks to give you Jip and burst your tube. 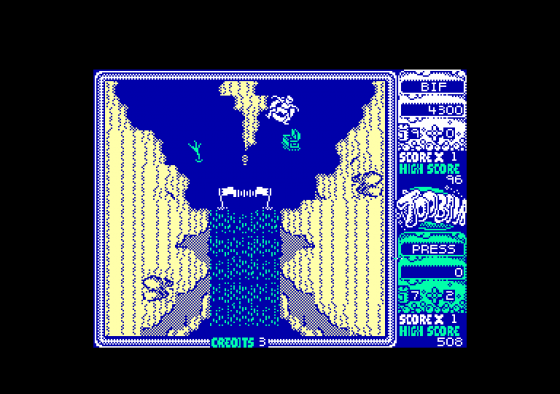 While you are wobbling down the Amazon, shades on and hair slicked, manoeuvring through gates to pile on the big points, you can collect letters which spell the word Toobin.

Throw a can at a weedy twig-like thing and it may release a letter which, just to make things a little irksome, bounces around the river until you catch it. The floating gates have scores on them which are halved if you hit a supporting post. A bit unfair you may think? But that's life, you lucky people.

Toobin is really a racing game for two players. Biff and Jet, the resident river cats represent you (and a friend) in your bid to become a champion toober around the world's most famous rivers, and if you are good enough, Mars too! Controls of the CPC are usually a little difficult for two players but with Toobin the problem is easily mastered as the controls are not difficult to comprehend. I actually found the keyboard controls more responsive to the desired moves of my gallant toober. The scrolling of the scene down the screen is fairly good as are the graphics, although at times it is a little difficult to judge safe distances from the prickly weedy twig-like things, floating logs and sturdy rocks. Nevertheless, after a few games, distances can be accounted for and become a part of the overall toobing proficiency.

Each river carries its own individual backdrop and obstacles which for the CPC are adequately sketched. The Amazon, Yukon, Nile, Rio Grande and Colorado all feature in this jaunting adventure in a giant rubber ring. I did not manage to see the Martian river system, although Domark tell me that it does exist. If you manage to witness the hurlyburly of space-bound waters I would be interested to know what they're like. Let us hope that Toobing on Mars ends with a party like Toobing on Earth.

Toobin is a simple game to play and can become addictive, as the coin-op version has already proved.

Certain members of the ACU team have taken to Toobing like a goose to a duvet which is a sign that the watery, air-filled wobbiers are a bit of a hit.

Toobin' is a simple game to play and can become addictive, as the coin-op version has already proved. 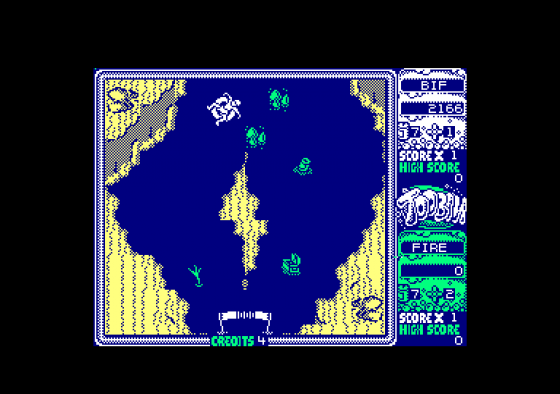 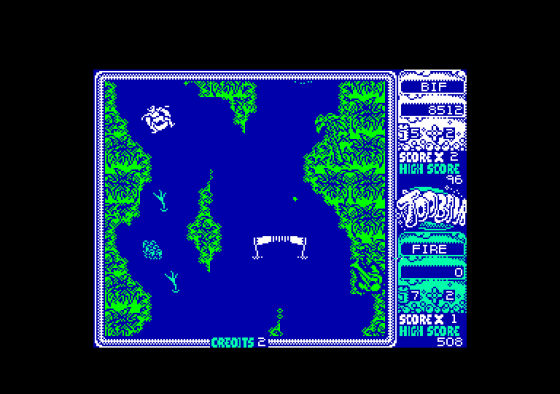