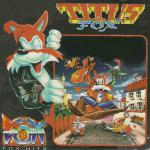 Titus The Fox | Some Time Later... | A Game Riddled With Holes? | The Bottom Line 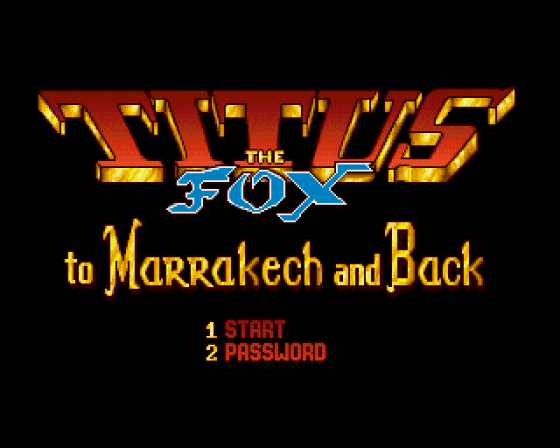 And they say the French are weird! The groovy new Titus The Fox seems to have generated a similar sort of oddness in the Amiga Power reviewing department...

One quiet day in the Amiga Power offices:

Mark: Hey Stuart, have you seen this? It's that groovy new Titus The Fox game from Titus. Whaddya reckon then? 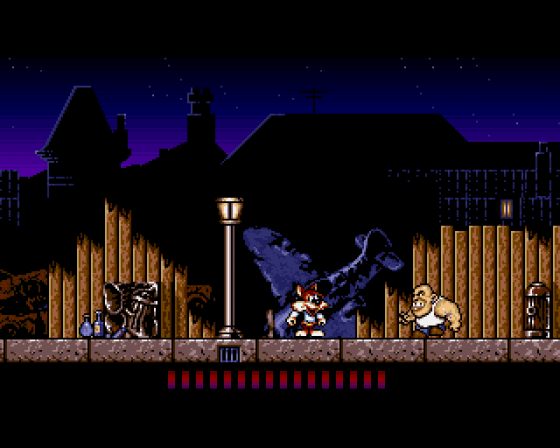 Stuart: Hmm. Looks a bit like The Blues Brothers to me.

Mark: Yeah, but look at that central character. That fox is just soooo cute.

Stuart: Well, yes - but how many games have we seen recently with a really cute fox in them, but no gameplay? 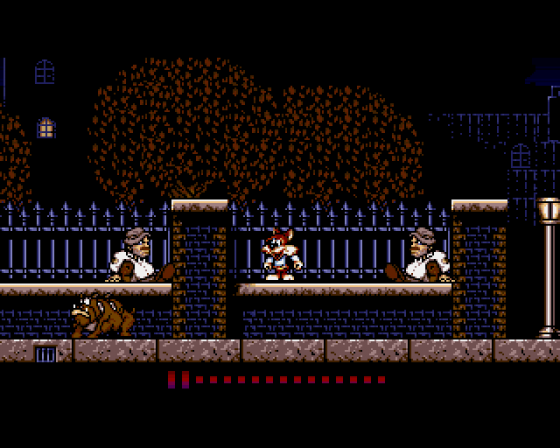 Mark: True, true. I guess the proof will be in the playing. I think you're right about the similarity with The Blues Brothers - I just hope it's better than that. For some reason that game did nothing for me - it just didn't feel or look right.

Stuart: Hey, that's fighting talk where I come from - Blues was one of the games of the year as far as I'm concerned! Still, Titus are confidently claiming that this is even better. One French mag even called it "The new reference for all types of platform games". 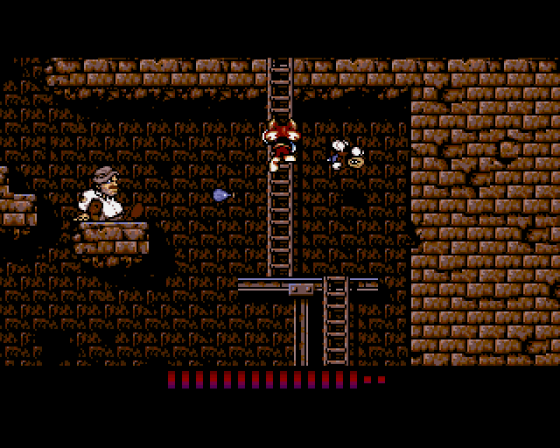 M: Too right. But I like a game with a bit of frustration in it. It's nice to be jumping for joy one minute, then punching the walls in frustration the next. 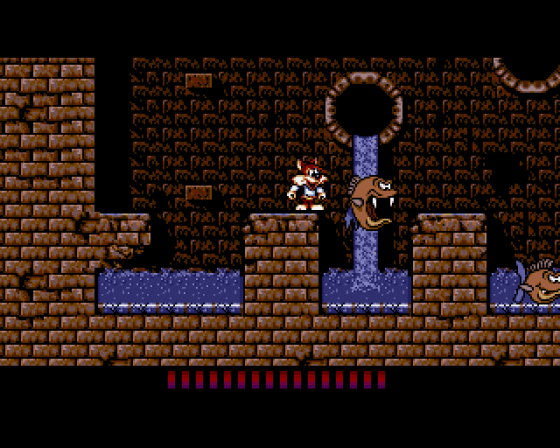 M: No, I wouldn't say so. I think you need to relax a little more Stuart. I mean, just look at those graphics.

S: I can't see them - I'm getting so laid back I'm looking straight at the ceiling.

M: Oh boy. Sure, graphics aren't everything. But when a slick, mean thing looks like this, I think we're talking a bit of a winner. 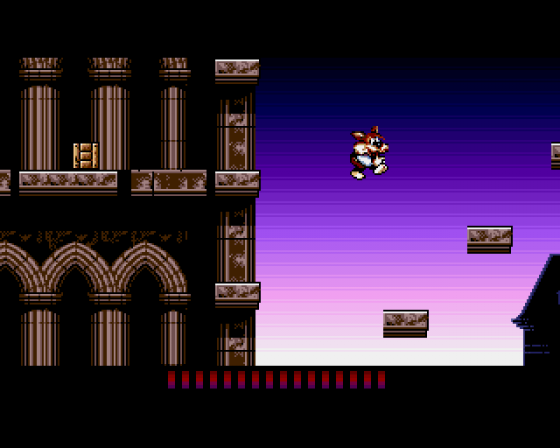 S: Actually, I can't argue with you there at all. It's a lush looker and no mistake, and it's all incredibly fast and smooth too. In fact, some people might even find it a bit too fast...

M: (Now who's talking about their private life?) You thought Harlequin was a bit of a classic last month. How do you reckon this compares?

S: Like a double decker bus compares to a 64-piece dinner service. They're really completely different types of game. Titus is a pure arcade game, with a bit of object manipulation but none of the depth of Harlequin's puzzle-solving adventurama.

M: Hey, I see what you mean about some of those tricky bits, though. It's a mighty good job they included that option to slow everything down. You know, the...

S: Who let him in? Seriousy though, it can be a real boon in some of the nastier bits to take things at half the pace, especially when you're on your last couple of bits of energy with a restart point just ahead. Actually, that's another one of the game's good points - restarts are scattered pretty liberally through the levels, usually just after the toughest bits, so at least you don't have to keep doing them over and over again. The password system is quite innovative too, giving you a code for each level, but hiding it away somewhere within the level itself so that you have to go exploring if you want it.

M: Yeah, the restart points are cool, particularly with that loading system...

S: Oh God, don't talk to me about that loading system! I'm not sure why it should take such an eternity to load each level (especially some of the really short ones at the start) and it's a bit ridiculous to have to load the music and sound effects in every time as well.

M: At least there's not much else to pick fault with presentation-wise, I wish they'd use the full screen though. I'm sick of games which cater for the smaller American display. Still, mustn't grumble. The size of and variation between the levels is something else. There's a real feeling of progression in there - and that's enough to make you want to push on, to see what's next.

S: You're right there. In a way the game reminds me of Hudson Hawk in that respect - indeed, in almost every respect come to that. The critical difference here, though, is in the playability.

M: Mmmm, I know what you mean. Hudson could have been such a winner if it hadn't been for that horrible control. The fox is just so versatile, though. I love the way that the nasties can be picked up, and then used as weapons against the other bad guys. Sheer genius.

S: Bitch of a thing to actually do, though Titus The Fox could do with being just a fraction more forgiving when it comes to precise positioning. Still, it does add to the slapstick knockabout feel of the thing.

M: Which reminds me - what's the difference between Matt Bielby and a computer?

S: I don't know, what is the difference between Matt Bielby and a computer?

M: You only have to punch the information into the computer once!

M: I haven't laughed so much since last Friday's edition of Whose Line Is It Anyway?

S: ... especially that totally brilliant taxidermist sketch! The way that American comic just sat there, completely immobile, not responding to anything at all. In fact, it was just like...

Matt B: Look, I've told you two already, stop slagging Magic Pockets! And get on with the review.

M: Oh yeah. You know, there's something about the underground sub-levels that reminds me of Rick Dangerous. Except this isn't crap.

S: Don't talk to me about Rick Dangerous...

M: Don't worry. I think Rick Dangerous is about as much fun as the totally overrated Xenon 2.

M: Solidarity, brothers. Oops, we better get back to the review (again). So, final scores on the doors for you, Stuart. Did the earth move?

S: Are you kidding? I thought I was playing in Sensurround (tm).

M: I'm not sure if I'd rate it as a classic. But for instant kicks, I reckon Titus The Fox is nearly up there with Parasol Stars.

S: I don't really think there's much point in comparing them, to be honest. This doesn't have the immediate appeal - the first levels are so short and simple, and the loading pauses between them so enormous, that you need a fair amount of self-discipline not to be completely put off at the beginning. Get past the first couple of stages though, and you're faced with levels so big and demanding that you'll be irresistibly drawn into a serious long-term challenge.

M: Mmm, maybe you're right. I've got a sneaky feeling we'll be playing Titus The Fox way into the summer, and maybe beyond. One thing's for sure though.

M: They'll never let us do another review like this.

Wonderful graphics, fabby toons and superbly designed levels - Titus seems to have it all. Maybe the best out-and-out Amiga platformer to date, even. The central character gives Sonic a real run for his money in the cute stakes too. Any complaints, Stuart?

Downers: Only little ones, Mark. This is a tough enough game already without having bits where you fall through the floor without warning. And the loading's a real pain at the beginning. That's really about it, though. And I can forgive it those just for the character - he's absolutely gorgeous.

A worthy successor to The Blues Brothers, though Titus The Fox doesn't perhaps improve significantly on its parent. It's just as good, but in different ways - so it's definitely worth owning both. Whatever, it's certainly worth a good...

Titus The Fox | Some Time Later... | A Game Riddled With Holes? | The Bottom Line

A worthy successor to The Blues Brothers, though Titus The Fox doesn't perhaps improve significantly on its parent. 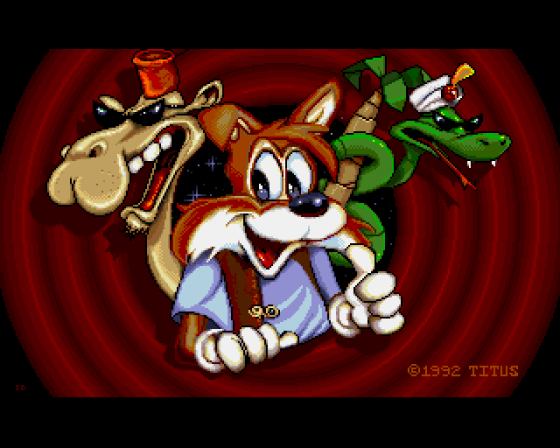