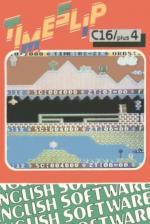 Timeslip, for want of a better description, is a bit like three versions of Scramble rolled into one. The screen is divided into three sections or time zones. At the top is the planet surface, this is the nearest thing to Scramble proper. You have to manoeuvre the rocketship over the terrain and blast literally everything that gets in your way. Whilst you score points for this, the short-term objective is to destroy the twelve orbs placed in very awkward positions.

When you've wiped out the orbs in zone one it's on to zone two and what the blurb describes as 'jet through the underground caverns'. My version had underground caverns alright, but the 'jet' bore more of a resemblance to a sparrow. Anyway, the order of things in zone two is much the same as for the previous one. You have to manipulate the jet (sparrow) around all the nasties and destroy the twelve orbs.

You have to complete your mission and destroy all 36 orbs in 24 hours (not real ones). In addition, you must synchronise the clocks in all three zones to 00.00 hours.

If you do take a hit, or do something stupid like crash into the mountains, you incur a 30 minute penalty. As if that weren't enough to screw you up, if you get hit five times a 'timeslip' occurs, i.e. all the clocks are desynchronised. Ha ha what a laugh. Had me in stitches after I'd spent half an hour getting them almost right.

My version had underground caverns alright, but the 'jet' bore more of a resemblance to a sparrow.