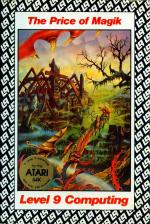 There I was, stripped almost to the buff, sticky and reeking from an over-generous application of Ambre Solaire, and ready to be transformed into a sun-bronzed god. Then The Price Of Magic arrived.

I should have resisted the temptation to load it up there and then. Such is the hypnotic power of the Austin clan's text and graphics adventures that, once I had begun to play, my chances of pulling away before sunset were negligible.

A sequel to Level 9's successful Red Moon, The Price Of Magik is available for XL and XE systems and is Lenslok protected. Your aim is to defeat the sorcerer Mylgar who has gotten a little too big for his curly-toed carpet slippers.

There are no treasures to collect. The name of the game is magic - you must acquire and learn to use 18 spells.

At the start you know as much about magic as Frank Bruno knows about the mating rituals of yaks. But to win you must know everything - about spells, that is.

Each spell requires a certain object to focus through before it will work, so it is essential to find as many objects as you can.

Once you've discovered the name of a spell - they tend to be scattered around as inscriptions on scrolls, parchments and other less obvious items - it's easy enough to find out what object goes with it.

Just CAST VIM or whatever - if you haven't already got the appropriate object, the program will tell you which one you need.

However, even when you've got the right object you've still got to work out what effect the spell has and when and where to best use it. Not so elementary, my dear Watson.

There's bags of locations to explore without fear of coming to a complete stop because of an obscure puzzle.

There are plenty of objects too, and you could end up looking like an oversuccessful rag and bone merchant if you tote everything around with you.

I preferred to play with the illustrations - over 200 of them - turned off. They're attractive enough, but added little to my enjoyment and sometimes seemed to conflict with the textual description.

Among the many superb features are the sophisticated parser (I loved being able to examine all objects in one go), huge vocabulary, massive text, very fast entry and response, good combat system and character interaction.

Another thoroughbred from the Level 9 stable. Long may it continue to produce them.