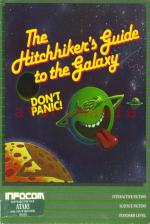 What sort of probability factor would you give to the chances of a cult radio programme going on to become a television series, an LP record, several books, a stage show and is currently being made into a movie? Highly improbable, right?

Well, The Hitchhiker's Guide To The Galaxy, by Douglas Adams, has not only achieved all of that already, it has gone one step further.

The immensely successful series now features in a brilliant text adventure, written by Douglas Adams himself and programmed by those masters of artificial intelligence at Infocom.

And, believe me, the result is magnificent. It has already gone straight to the top of the charts and has just picked up the WHSmith Game Of The Year award, probably the first of many such awards.

Hitchhiker looks set to be one of the all-time greats.

Like all Infocom adventures, it is text only, has an immense vocabulary, an amazingly sophisticated input analyser, screens and screens of fulsome prose, and, because of the sheer size of the game, comes on disc only.

Even if you've tasted the sweet pleasures of an Infocom adventure before, I guarantee you'll never have played one like this.

When was the last time you suddenly found yourself transformed into another character partway through the game and found yourself talking to yourself, if you catch my drift? And that doesn't happen just once, either!

You begin the game as Arthur Dent. Your immediate concern is how to stop the local council bulldozing down your house in order to make way for a bypass.

However, that anxiety soon becomes a trifle insignificant since the Earth itself is about to be destroyed by a Vogon Constructor fleet to make way for a galactic bypass.

If you are familiar with the books, or radio series, etc, you'll find the opening sequences ringing a few bells. But you can't rely on that knowledge for very long - you are soon confronted with many situations that are going to take more than a little lateral thinking to resolve.

Many of the characters from the series make an appearance. Ford Prefect, Zaphod Beeblebrox, Trillian and Eddie, the ever-cheerful shipboard computer. And, of course, the galaxy just wouldn't be complete without Marvin the paranoid android.

He's still as miserable as ever and his behaviour will surely make you a little paranoid, too.

There's also a host of much-loved subsidiary characters, objects and incidents. Remember the Ravenous Bugblatter Beast of Traal? He's still ravenous and dangerous but very stupid - if you can't see him, he thinks he can't see you.

The awful Vogon captain with his even more awful poetry is here, and so is the Babel fish, the obtaining of which, incidentally, presents one of the most devious but deliciously amusing, multi-layered puzzles I have ever encountered.

It's almost as if the game is out-thinking your every move.

I am not at liberty to reveal just what your ultimate goal in the game is, not that it would help you in the slightest if I did.

But there is one source of help available throughout the game, and that's the guide itself.

By typing CONSULT GUIDE ABOUT something, chances are you will glean some useful, and certainly hilarious, information which may, or may not, assist you in your mission.

And even when the guide cannot provide data on the selected topic, you're still sure of a variety of witty responses.

If you really get stuck in the game, don't panic. You could do a lot worse than invest a further £7 in a copy of Infocom's Invisiclue book - concealed hints - for the game.

It is cunningly designed, entertainingly written and great fun in itself. It not only offers help where needed but provides lots of other suggestions to try out when you've finished the game, many of which might never have occurred to you.

The book really does help you to get every last ounce of enjoyment out of the adventure. Only buy it when desperate for help or when you've completed the game, as the temptation to consult the clues is overwhelming.

The game comes with a comprehensive manual and includes your very own piece of fluff, pair of peril-sensitive glasses - totally black - and a microscopic space fleet. You must supply your own towel.

Hitchhiker is zany, original, challenging and entirely and faithfully logical in its own crazy world of logic.

The chances of you finding as funny or as superb a game as this between Earth and Magrathea are two to the power of ten million and rising, so don't waiting - hitchhike to your nearest dealer now.

Zany, original, challenging and entirely and faithfully logical in its own crazy world of logic.