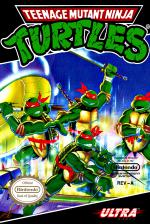 Cowabunga! It's pizza time! Well, it would be, but April, the Turtles' trusted friend, has been kidnapped by the evil Shredder who hopes to indoctrinate her into his gang. The Turtles have no choice but to go and rescue her - a mission that is fraught with danger all the way!

The game is split into two sections. The first of these is an overhead four-way scrolling view where you guide a Hero between sewers and buildings, avoiding Clan soldiers and Roller Cars as you go. Once inside a structure the game changes to a side-on view as you progress in platform-style areas fighting off the multitude of baddies that appear.

Any Turtle may be chosen to begin with, but if his Life Meter is reduced to zero he's captured, forcing you to select a new combatant. Captured Turtles may be rescued, and this has the effect of giving you another life.

Extra energy is gained by collecting pizza slices, and additional weapons and ropes to climb with can be picked up by defeating your foes. Underwater scenes must be completed within the time limit or you drown - turtles breathe air, not water!

If you're a Turtles fan who's looking at buying a new console, you might be interested in the new Mutant Machine Turtle Pack. It's a special edition package that features a Nintendo console (complete with joypads, etc) and free copy of the Teenage Mutant Hero Turtles game. The pack costs £79.99 - which is pretty good value for money.

1. Pizzas Whole or partial they renew your Turtle power.

2. Rope Gets you from building to building in the later levels.

3. Shuriken Either one or three at a time, these give you the chance to blast the baddies before they get close.

4. Kiai Destroys everything in its path.

5. Boomerang Same effects as shuriken, but if you catch it as it returns you can use it again!

6. Mr Invincibility Makes you invulnerable for a short time.

1. Raphael The needle-tipped Sai is Raphael's preferred attack tool. The speed and grace of his strikes are what he prides himself on.

2. Miachelangelo Compared to his comrades, Mikie's power is only average. Enemies around his feet usually fall prey to his nunchukus onslaught, and his courage will amaze you.

4. Donatello The dreaded Bo is Donatello's form of amusement. Don't be fooled by the fact that it looks like a simple stick, because this bady can take out enemies from both above and below.

I was a bit disappointed to discover that this isn't a conversion of the brilliant Turtles coin-op, but once I sat down and actually played the game I soon cheered up.

It's a very original and very addictive arcade adventure which requires planning and a good deal of arcade skill to battle through the sewers and kick some Foot ass without being captured.

The graphics are excellent and the sound is a faithful rendition of the Turtles TV theme music (not the hit single, Turtle Power). Put it all together and you've got a totally radical game that every Turtle dude should get his mitts on - pronto!

To be honest with you I was expecting this to be a complete pile of turtle droppings. So I was pleasantly surprised to find a good game lurking behind all the hype: this is a genuinely original and interesting product.

The graphics are excellent, if somewhat on the small side, and the soundtrack is fairly close to the theme music. The four amphibians come across as being different, each having its own abilities and weak points.

It's a shame the game doesn't have a two-player option. Other than that, it's a very playable game that deserves to sell by the lorryload.

Graphics 84%
The Turtles are brilliantly animated, and the backgrounds are superb.

Sound 88%
Gets your toes tapping from the start!

Playability 90%
You'll find this tastier than fresh pizza - it grabs you and doesn't let go.

Lastability 87%
It's unlikely that you will finish this in a hurry.

Overall 90%
Bodacious stuff! Definitely worth shelling out for!

Bodacious stuff! Definitely worth shelling out for!