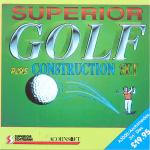 Superior Golf is the third golf game on the scene in just over a year. Leaderboard and Holed Out! surfaced first, followed by extra holes plus a course designer for the latter - Leaderboard copped out there and then, though to be fair it does have a very limited hole designer.

But Superior's version comes complete with six courses and an extensive hole and course designer, hence the sub-title 'construction set'.

In play it is reminiscent of Leaderboard and the graphics are not altogether different. Of the three, Golf has the best club selection process.

It is possible to test the range of each club before actually striking the ball, which deflects off trees quite realistically. All the usual samples for swinging, whacking, dropping and plopping are here.

Superior Golf has proper hook and slice, as did Leaderboard, with one annoying feature - when clicking on the power meter to commence a wing, should you lightly miss, the crosshair is displaced completely unless you intend your ball to fly off at right angles!

On the subject of crosshairs, they don't seem to represent the angle of deflection very accurately. The ball should fly off roughly along a straight line drawn between the golfer and the cross, which it doesn't. But apart from these grumbles, Superior Golf plays a good game, on par with Holed Out!, though both have the same bug - it's possible to make the golfer stand on water!

The hole designer is as good as the Holed Out! one, though both could be better. In neither can proper flood-filled areas be plotted - to create a 'doughnut'-shaped lake you have to build up a series of square lakes in a circle, because if you do it the logical way the whole area is filled, including the hole in the middle!

However, it is possible to create what you want with a bit of patience. The course designer allows holes to be shuffled around, with good diagrams showing the rough features of each hole, though I would have liked to 'drag' holes about using the mouse.

All in all, Superior Golf scores higher than Leaderboard and is on an even par with Holed Out! For purely aesthetic reasons I think I prefer the Holed Out! play, but technically Golf has more features, without the extra expense of a designer.

Other Archimedes A3000 Game Reviews By Sam Greenhill

Plays a good game, on par with Holed Out!, though both have the same bug - it's possible to make the golfer stand on water!
Logout