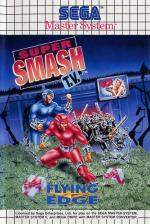 Set in a violent future, you're a contestant on the game show Smash TV! The rewards are great - cash, cars, holidays, VCRs - but the price of failure is death.

As you make your way around a maze of single-screen rooms, various robots attack, from crowds of club-wielding thugs to laser drones to the explosive Mr Shrapnel. Your default weapon is the high-tech equivalent of a pea-shooter, but you can collect power-ups in the form of rockets, a high-powered laser and smart bombs.

There are three stages to battle through, the ease or otherwise of your journey determined by the exits you take, but each inevitably ends with an end-of-level bad guy.

Mutoid Man's a half mutant, half tank monster with accurate eye beams. Scarface is a disc-faced horror but the toughest challenge is the Game Show Host himself. A well dressed and well armed nasty, he trundles around on caterpillar tracks crushing and shooting contestants.

The presentation's good but other elements are mediocre. The sprites are ugly, slow and too big and the controls, which allow you to fire directly ahead or behind of your sprite, takes some practice and could've been friendlier.

The coin-op and other conversions of Smash TV are fast, furious and wicked fun; it looks like the Master System drew the short straw. Only die-hard fans of the original need buy.

The coin-op and other conversions of Smash TV are fast, furious and wicked fun; it looks like the Master System one drew the short straw. Only die-hard fans of the original need buy.