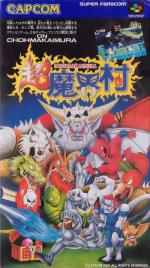 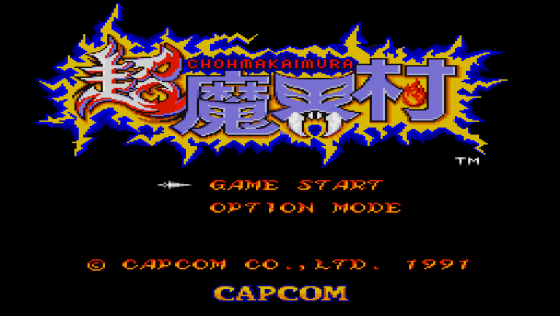 Sir Arthur is in trouble again! There he was, just "enjoying the company" of his gorgeous, pouting, shapely, curvaceous royal girlfriend when, all of a sudden, a demon from the foul reaches of hell swoops down and abducts here! Arthur is obviously a tad annoyed. After all, this is the third time a similar situation has occurred (firstly in the coin-op Ghosts 'N Goblins and secondly in the follow-up Ghouls 'N Ghosts). Once again, only a daring quest through enemy territory will result in the fairy tale couple being reunited - hurrah!

This generally involves traversing seven eight-way scrolling levels, coping with all manner of evil creatures intent on depriving you of your life. However, Arthur is well-endowed in the offence department and is capable of firing plenty of magic weapons at the evil ones. He starts the game with an infinite supply of magic lances, but plenty of different pick-up items are available for use during the game. The heroic knight also wears special protective armour which shatters after contact with an enemy (leaving him running around in his boxers!).

Sir Arthur finds all sorts of large, powerful weapons dotted around the Super Ghouls 'N Ghosts landscape. Lances and daggers are standard fare. Later on in the game there's the likes of deadly meat cleavers and scythes to help you cut a swathe through the opposition. Keep well away from the "napalm" flame brand and the flying magic knives. Both weapons are the most useless piles of tosh known to man! 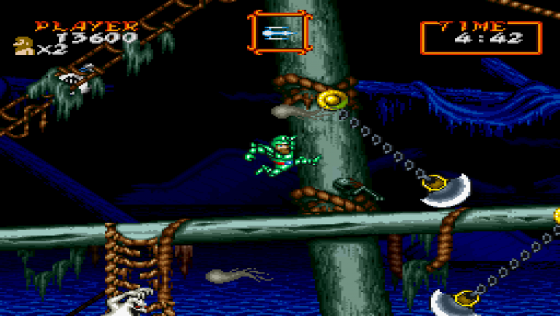 The seven levels' worth of terror are made all the more horrifying by the sheer amount of hazards in your way. Level one may look pretty simple, but it's not. When he gets to the middle of the level, Arthur has to deal with massive tidal waves that literally wash the scenery away!

Things don't get any easier, either. Level two sees Arthur aboard a Marie Celeste-like ghost ship, which starts to sink as soon as our hero clambers aboard! Can you keep the knight above water and deal with the masses of ghosts out to spook Arthur's monkey ass? 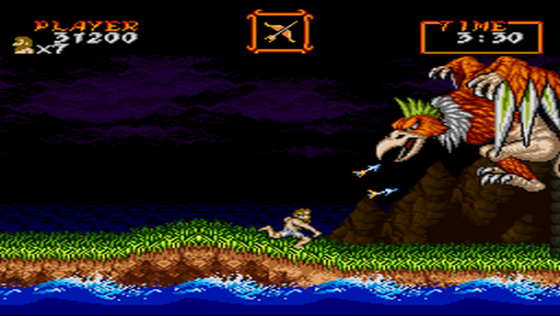 Three different suits of armour are available in Super Ghouls 'N Ghosts. The bog-standard suit of armour has only shielding properties, but there are two others that boost your offensive capabilities.

Arthur's power-up potential is greatly increased through the use of special extra items. These are either carried about in pots by the undead or hidden inside the chests that are occasionally exhumed from the bowels of the earth.

But beware, became sometimes booby power-ups (like the useless napalm fire weapon) are found within. Other chest-related booby traps include the appearance of a wizard who fires shape-changing magic bolts at you! 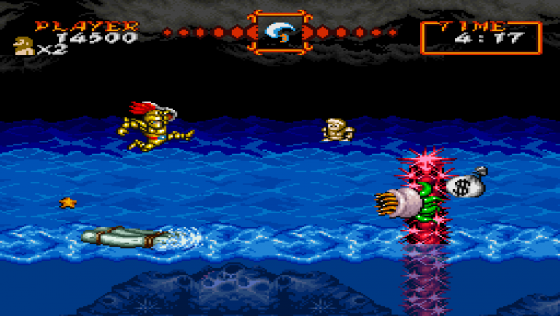 Catch one of these and you're transformed for a short period of time into either a defenseless woman or a tiny baby!

Well, everyone knew this was going to be the big one, and indeed, Super Ghouls 'N Ghosts is another fine example of Super Famicom brilliance. First of all, let's start by saying that the graphics are truly exceptional. Capcom have even bettered UN Squadron in the brilliant backdrop stakes by producing some totally terrific visuals.

I defy you not to be impressed by the ice level, where tons of snow falls over and behind the parallax scrolling backgrounds! The tower level too, where Arthur runs around a rotating tower is another fine example of exceptional graphics. 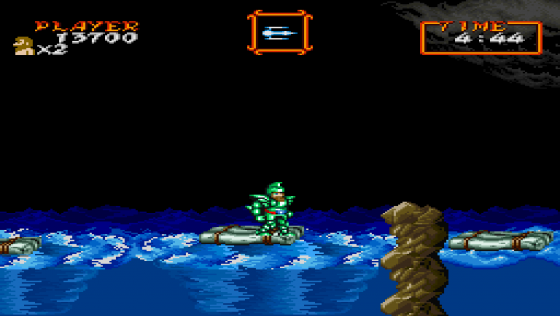 The sound's awesome too with a kind of orchestral remix of the original Ghouls 'N Ghosts theme. Capcom have also supplied us with a game that's high in the lastability stakes too. Even completing the first couple of levels takes some effort, and once you've battled your way to the end of the game there's a very nasty surprise waiting for you!

Capcom are certainly producing the goods as far as Super Famicom games are concerned - Super Ghouls 'N Ghosts is an essential purchase!

I was knocked out by this when I saw it in the States back in June - in its finished form it's even better! The programmers have utilised many of the Super Famicom's special features to produce some of the most stunning graphical effects yet seen in a console game. 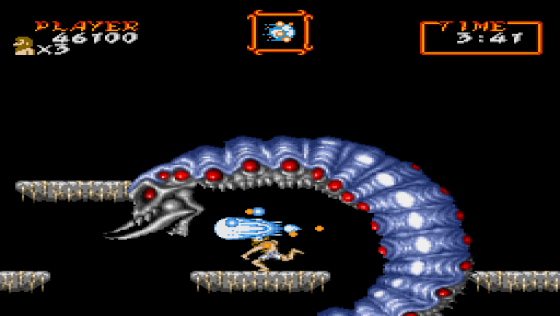 The sinking ship, the snow-storm, the erupting ground, the sea swell... amazing stuff! And not only are the effects awesome, the graphics themselves are stupendous! Gorgeous multi-layer parallax-scrolling backdrops, brilliantly, animated sprites and excellent end-of-level baddies makes this a feast for the eyeballs.

It's an aural treat too, with a series of speaker-rending orchestral pieces that add to the atmosphere. On the playability side, this is tough. Obviously not on easy level, which takes a day or so to crack, but on the harder levels where the going is difficult enough to challenge even the most skilfil of Ghouls 'N Ghosts experts!

For the second time in as many months, Capcom have come up with a blisteringly hot Super Famicom game that you just have to get! 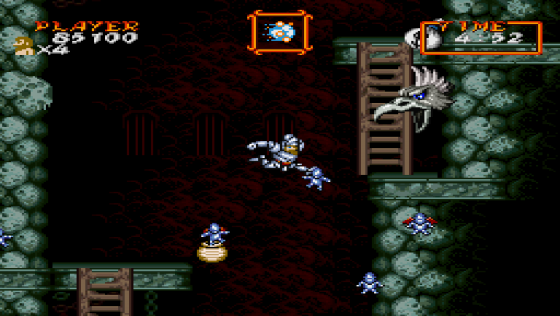 Presentation 91%
Plenty of options to tweak the gameplay and a lengthy intro sequence.

Graphics 90%
Some of the greatest backdrops and sprites yet seen in a Super Famicom game, and it doesn't slow down much either.

Sound 94%
You'll be thinking that they've crammed in a whole orchestra into your Famicom!

Playability 94%
Amazing gameplay that'll have you addicted within nano-seconds!

Lastability 90%
Seven levels to complete, and plenty of difficulty levels to sustain interest. 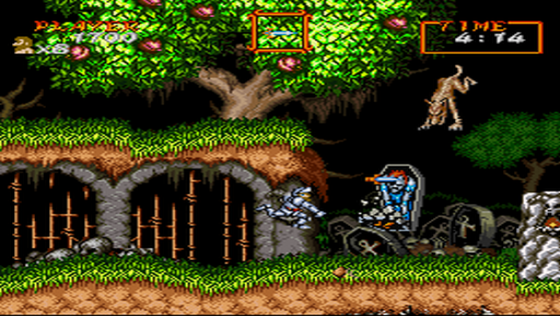 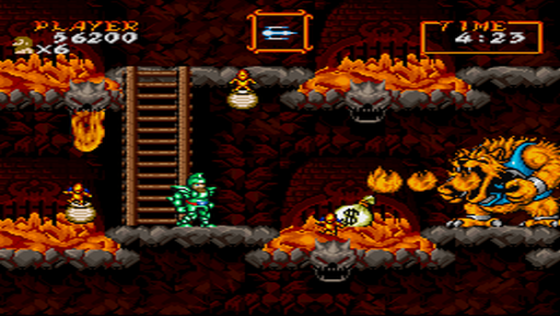 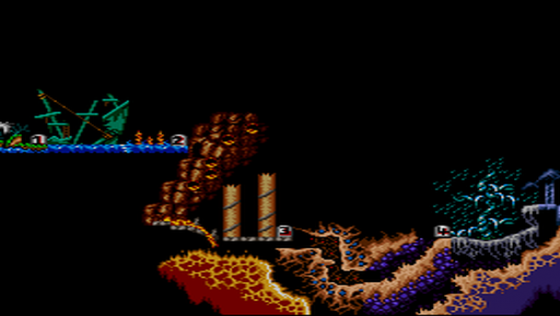