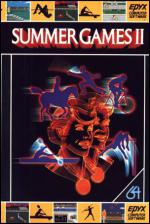 In the Top Ten computer games that should have been hits, Summer Games must surely take the number one spot. It was much better than Daley Thompson's Decathlon, but in Olympic year no-one could resist the personal endorsement of our gold medal winning superstar.

Epyx are not taking it lying down, though. The top American arcade game writes (Impossible Mission, Pitstop I and II) have just launched Summer Games II - with eight new events.

Joystick manglers are going to love this one. It features the same frills that made the original games so eye-catching. Things like the nation selection board - where you choose your flag and enter the name of your favourite athlete. The national anthems of all the countries represented with flags are played back each time one of them wins an event. There is also an opening ceremony complete with white doves and, of course, a winner's rostrum.

The best of these is the Equestrian challenge which is a masterpiece of programming. Not easy though - requiring six different positions of the joystick. First make your horse canter, then gallop, approach the obstacles correctly, jump and then land without falling. It will take a lot of practice to get it right but it's fun when you do and the animation is stunning.

The javelin is also excellent - you can almost feel the weight of the spear as you balance your athlete for the throw.

What I like about Summer Games II is that more skill is required to master it than with other similar games. It's more than just shaking the living daylights out of the joystick.

With the high jump, for example, you've got to get your approach to the bar just right - as well as building up sufficient pace.

Race freaks are not left out, though, as there are two of these, cycling and rowing, as well as a head-to-head fencing bout.

Ask any C64 gamer what, in their opinion, is the best sports simulation on the market and chances are they will say International Soccer. That opinion is going to change - Summer Games II must now take the gold.

Ask any C64 gamer what, in their opinion, is the best sports simulation on the market and chances are they will say International Soccer. That opinion is going to change - Summer Games II must now take the gold.