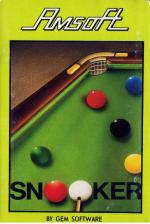 A definite 'must' for all the budding Snooker Champions of the CPC464 world. Although you may expect to see many more versions of this popular game to appear within the next few months, the rivals will have to go a long way to produce a better version than this one from Gem Software.

All the subtle arts of the game have been included, even top, back, left and right spins can be accomplished with ease. Taking advantage of the realistic colours and pixel precision of the CPC464 you can be forgiven for forgetting that you're not playing on a real table... There's even a sliding score frame!

GT64 users need not despair however, since there is an option to choose numbered balls. This of course, is also useful for those of us that aren't so familiar with the game and need some prompting when it comes to deciding in which order the balls should be potted. A definite must to stop those petty arguments when playing with other members of the family!

If you're really short of time before a big match with your best friend, brush up your techniques with the 6-ball practice game. This option is bound to prove popular with the real Snooker Champions amongst us and indeed for the beginner as well. Certainly, one of the best games to be introduced for the CPC464 so far, and I predict that it will be as popular as it is addictive. Definitely a 'must.' for any Snooker enthusiast!

One of the best games to be introduced for the CPC464 so far, and I predict that it will be as popular as it is addictive.