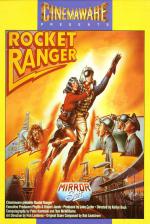 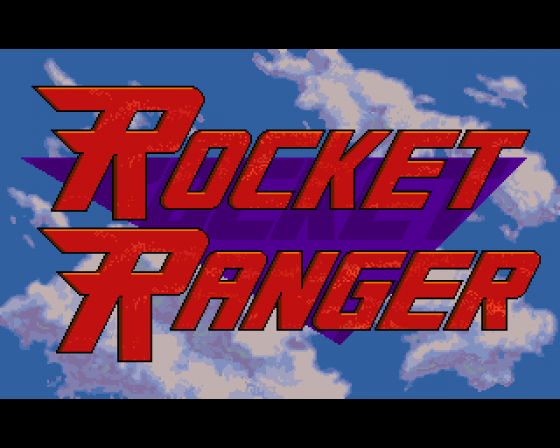 Ask anyone to name something that the 1940s are best remembered for, apart from the Second World War, and the chances are the reply you'll get will be the old Republic Cinema Serials which captivated Saturday Morning audiences both young and old and on both sides of the Atlantic for many a year, and still have a cult following today. One of the most popular of these was King Of The Rocket Men, which followed the hero, Commando Cody as he jetpacked around the world, thwarting evil criminals and duffing up Nazis. Rocket Ranger is an attempt by Cinemaware to capture the old magic of these serials, and the end result is better than anyone could have hoped for.

The storyline of Rocket Ranger is suitably corny and presented in the form of a wonderful graphic opening sequence at the start of the game. The year is 1940 and Cody, a US Engineer serving at Fort Dix is working late one night when, after a mysterious blinding flash, he finds an assortment of wonderous rocket equipment on his desk. The accompanying booklet tells a terrifying story of a world 100 years distant, in which the Nazis have won the war, conquered the entire planet and now rule over it with their own barbaric form of 'government'.

In an attempt to stop this horrifying eventuality, agents from the future have sent the equipment back through time in the hope that some brave soul will take on the role of Rocket Ranger, and single-handedly thwart the Nazis' plans. 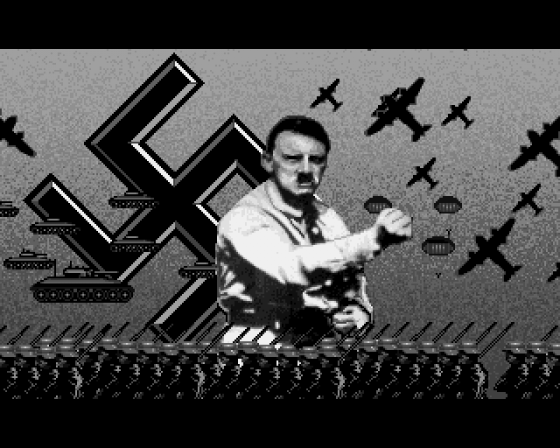 After the opening sequence, the game proper begins at Fort Dix, where Cody plans out his mission. Before can go anywhere, he must report to the War Room, where five top secret agents are sent around the world, gathering intelligence on the Nazis plans. The first piece of information you'll get is from your agent in Germany, who informs you what the Fascists are up to. Their plan, devised by the evil Colonel Leermeister, is to crush the allied forces using a new form of bomb powered by Lunarium, a rare mineral found only on the Moon. To get the Lunarium from mines on the moon, the Nazis are brainwashing women, turning them into zombie-like slaves, and sending them to the moon to mine the Lunarium.

To stop the Nazis before they can realise their diabolical plan, Cody must collect five individual sections of space rocket, each held at a secret Nazi base. Once he has all five, he can piece them together and fly to the Moon, where he can attempt to destroy the Lunarium mine. To find the rocket bases, Cody must position his agents around the world via a map screen which uses icons to show were each agent is. To look for a rocket base, position an agent in a country and wait for him to report back with his findings.

Sometimes the country will be clean, while another time it may hold a rocket base, a secret Nazi Lunarium plant, or a number of assorted Nazi hideouts, such as the brainwashing complexes or munitions dumps. Once an agent has found a base, he can be transferred to another country and another mission (providing Leermeister hasn't found him and had him shot, that is!). As soon as Cody has some useful information, he had better act on it and fast, as the Zeppelin bombing fleet gets nearer every day. Should Cody stay at Fort Dix for more than a year, he's Court Martialled for cowardice, and rightly so. 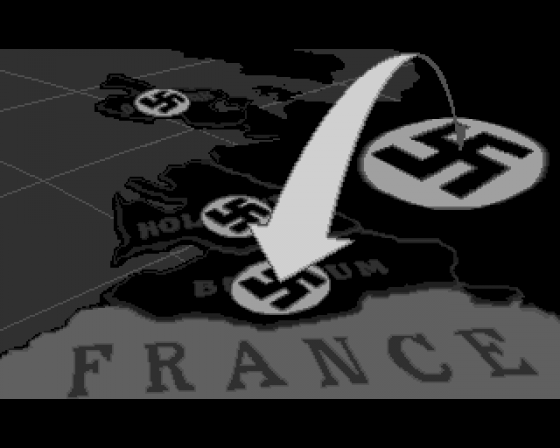 Using a code wheel supplied with the game, the rocket pack can be loaded with the right amount of Lunarium to travel to the destination country. Taking off from Fort Dix is a tricky procedure that takes times to master. Cody runs from left to right across the parade grounds, and the joystick button must be pressed each time his feet hit the ground to build up speed. When he is running fast enough, his rocket pack bleeps and pushing up on the stick will propel him skywards. Should the button presses be out of sync with Cody's footsteps, the rocket pack coughs and wheezes and Cody falls flat on his face. If this happens three times, Cody takes off automatically, but at the expense of two months' training time.

After take-off there's a short graphic sequence that shows Cody's flight over a world map before he reaches his destination. When he finally gets there, there'll be any one of four different kinds of battle awaiting him. For example, if Cody arrives at a country occupied by a Nazi complex such as a bomb factory or brainwashing plant, a Space Harrier-type game has to be played. A rear view of Cody is given as he flies high above the clouds and is assaulted by a crack squadron of Nazi planes. The planes attack in waves, and in many different kinds of formation, firing at you as they pass. Cody can take two direct hits from the fighters, but a third will cause his rocket pack to cut out, and he'll be forced to parachute to a nearby country. Fortunately he's carrying protection in the form of a deadly rapid fire radium pistol that kills 100% of all known fascists dead with just a single shot. If Cody manages to knock out the entire squadron, he automatically completes the mission in hand, and the result is displayed as a text screen, detailing exactly what Cody has achieved and how much Nazi efficiency has suffered. Slowing down the Nazi war machine is the key to winning the game, as should they attain 100% efficiency they win the war outright.

Flying to a country that houses a rocket base sees Cody engage in hand-to-hand combat with a German guard as he battles to steal a piece of rocket. To defeat the guard, Cody must reduce the guard's energy level to zero by continually punching him. The guard is normally defensive and just concentrates on blocking Cody's punches, so Cody must be alert, punching the guard in the head when he blocks his body and vice versa. The guard will from time to time have a jab back at Cody, so he has to be ready to block as well, or he'll get duffed over by the guard and be captured. 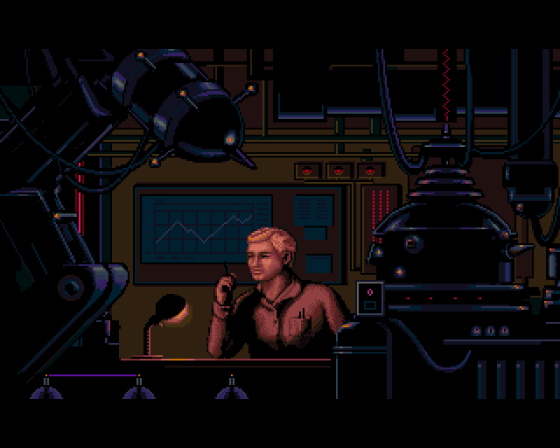 When the guard's energy reaches zero, he falls back against the wall, hitting his head on a control panel and opening a steel door that slides back to reveal one of the elusive rocket parts which is then smuggled back to Ford Dix by your friends in the local resistance. The first part is a walkover to win, but the rest is not so easy, as the soldiers who guard them get progressively tougher.

As you fly about the world gathering rocket parts, Cody's Lunarium supply begins to get low, so it must be replenished by raiding the Nazi Lunarium plant. With any luck, Cody's secret agents find it quite early on in the game (it's normally found somewhere in Africa) and he can then raid Lunarium from it himself or receive it in small amounts as it's stolen by partisans. The Lunarium base is heavily guarded by Anti-aircraft guns, so a night attack is necessary. Zooming over the base in the same Space Harrier fashion as described earlier, Cody must knock out all the ack-ack guns with his radium pistol while avoiding the flak they throw at him.

Aside from the main mission of acquiring rocket parts and stealing Lunarium, there are a couple of sub missions that must be undertaken if the Nazis are to be stopped, the first being to stop Professor Barnstorff and his voluptuous daughter Jane from being kidnapped and sent to the moon, where the Prof would be forced to use his scientific knowledge to speed up Lunarium production. To stop them reaching the moon, Cody has to fly to the Atlantic, where a zeppelin is taking them to the Fatherland. Yet more Space Harrier frolics here as Cody chases the zeppelin, avoiding the air-to-air missiles and trying to shoot the gondola section at the base of the airship. Missing the gondola and hitting the airship itself will cause it to blow up and the mission will have failed. Successfully hitting the gondola will see off the Nazi gunners, allowing Cody to board. However, the mission isn't completed yet, as the Prof and Jane have no idea who Cody is and won't allow him to get at the airship's controls unless he can convince them by choosing the right things to say to them for a selection of set phrases.

If Cody can stop the Nazis from getting the Prof to the moon, he can buy enough time to get the rocket parts assembled so he can fly to the moon where the final battle takes place. With Radium pistol in hand, Cody faces the female lunar zombies scantily clad in leather hip-boots who drop down from ropes and strafe him with laser fire. Cody has a limited time to destroy all the female zombies by blasting them with his gun before the exposure to the Lunarium causes him to black out (Lunarium affects men but not women, which is why the Nazis are using them as slaves). Shooting them all before time runs out brings Lunarium production to a halt, thwarting Leermeister's plans and saving the free world as we know it.

Rocket Ranger is quite simply a brilliant game. Cinemaware, after much experimentation have at last produced a game that truly combines state-of-the-art aesthetics with gameplay to match. The strategic side of the game such as positioning your agents and gathering intelligence is absorbing, and all the arcade sequences, particularly the fight with the guard and the shoot-out on the moon are so good they'd make commercial quality games on their own! As usual, presentation is exemplary. The film-style opening sequence is atmospheric and there are some excellent set-pieces such as the take-off sequence and the secret Nazi transmissions picked up on Cody's wrist monitor. The graphics are far better than anything Cinemaware have produced before, and the screenshots here should convince you of that. Sound is of a similarly high quality with plenty of tunes and exquisite sampled effects. Just listen to the fist fight for some real bonecrunching punch sounds! What little speech there is is well executed - far better than the crackly samples heard in The Three Stooges.

What makes Rocket Ranger such a great game is the way all the different ideas hang together, making an overall product that is by far the most fun I've had with my Amiga all year.

Rocket Ranger is a big game. So big in fact that, like previous Cinemaware games, it fills up two disks. Fortunately here at CU we've got an external disk drive, so the need for the tiresome task of disk-swapping was eliminated.

Although Mirrorsoft's Cathy Campos ensures us that disk-swapping has been kept 'to a minimum' on single drive Amigas, it might be wise for those who aren't blessed with such luxuries as external drives or extra memory to take a look before splashing out.

Wow! Such a great game...! All the different ideas hang together and make an overall product that is by far the most fun I've had with my Amiga all year. 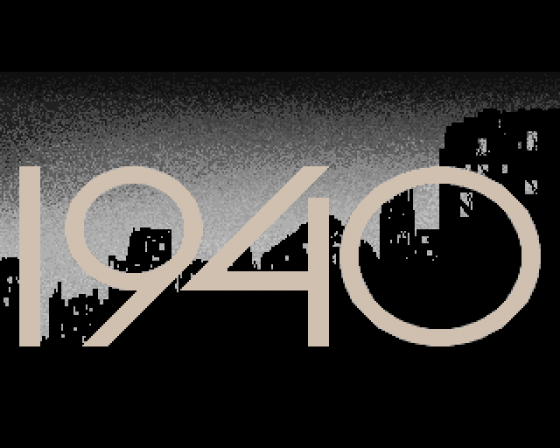 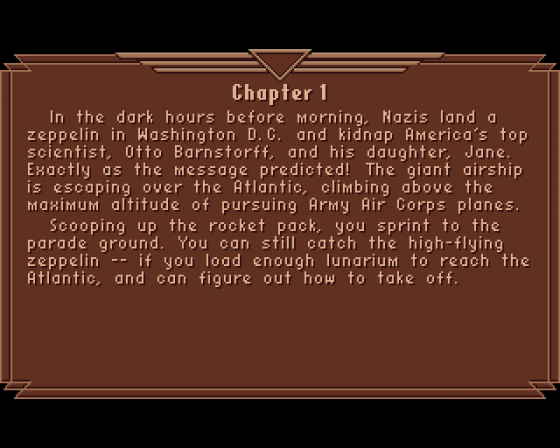 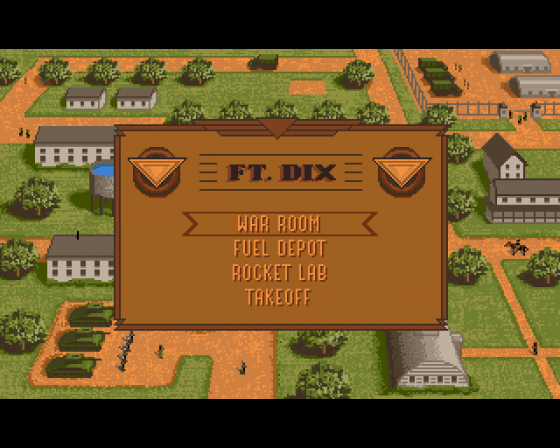 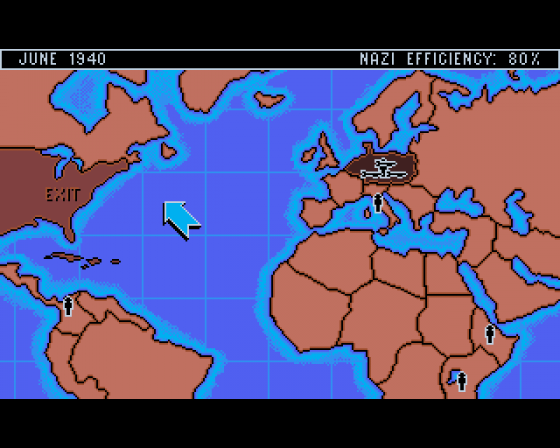 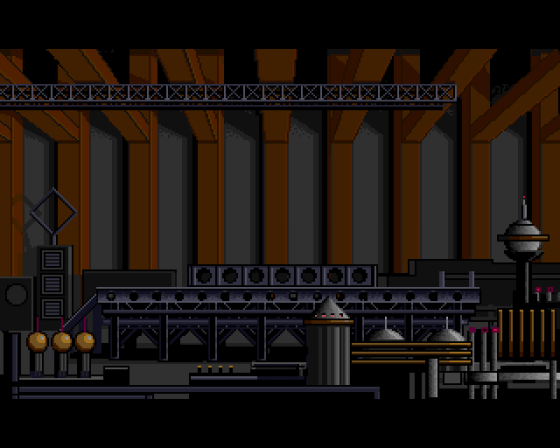 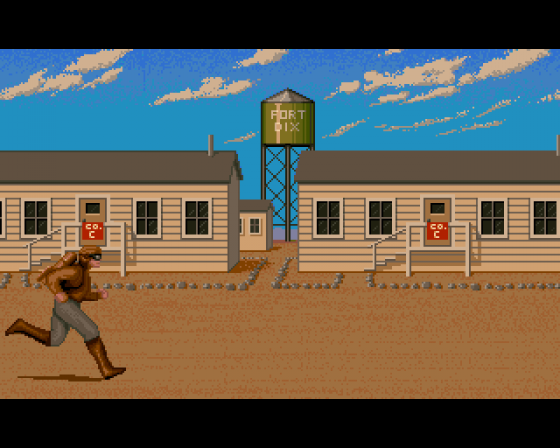