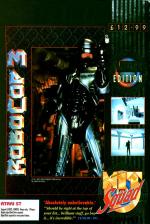 The signs say that the future has a silver lining in Detroit. They may be a tad optimistic because when you enter it in this game, it's a horrible place. That says a lot for the atmosphere you experience as you play, because Robocop 3 is one of those games which draws you in until you forget about the outside world until brought back by an aching bladder and, or, a cold cup of tea beside you.

You must rush around the city (in 3D), apprehending villains and having what can only be described as an adventure. The plot of the game twists and turns like the film, and there's even an option to play the movie scenarios or the arcade game. Either way, you find yourself blasting, driving, flying and walking around having a whale of a time.

The car-chase sequences are very well done indeed, with a real sense of speed and masses of excitement as your quarry (you're told who to chase by your ST) rushes away from you.

But the flying sequences, although pretty similar, are great to get into as well. So are the walking bits. In fact, the whole thing's rather great.

It was a classic idea, to use 3D in Robocop 3. Forget all platform blasting notions and get into the assault car for a decent bit of chasing fun. Sure, though, after a while it gets a trifle samey, but the quality of the game tends to keep you there, and you won't be switching off in disgust when you have to do a section again because you failed it.

A lovely idea, neatly executed. It's looking a tiny bit dated now, but the 3D is fast and smooth, and the game, coming as it does on three disks, is big enough to satisfy those who want something to get your teeth into. Robocop 3 may not be the future of law enforcement, but it should have a future in your games collection.

Sorry. That wasn't very good, was it? Never mind - buy this and you'll enjoy it.

Get this. You'll enjoy it.