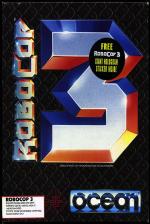 The dust has settled. Terminator 2 has been and gone. Things are relatively quiet again, and the world is prepared for the next violent and ruthless lawgiver to come along and shoot-'em-up. Yes, it's Ed Ricketts again. Him or Robocop 3 anyway

Let us, as is customary, have a small recap here. In 1987, three years after The Terminator first became a terminatee, the future film city of Detroit gained a lawman who (let's be honest) looked more than a little like the Tin Man from The Wizard Of Oz.

This dude had the startlingly obvious name of 'Robocop', and went on to star on T-shirts, mugs, cereal packets and ST games everywhere. Not very good ST games, actually, so when Ocean announced that they had the licence to the as-yet unreleased third film in the Robo series, thoughts flitted through gameplayers' minds everywhere of yet another scrolly jumpy runny shooty platform game. Boy, as they say in old films, how wrong can you get?!

Robocop, for his third outing, has been transformed into absolutely gorgeous dimensionality of the three variety by the programming team Digital Image Design, and reet smart he's looking, too. Yon game comes in two varieties - the Arcade version and the Movie Adventure version. Both versions feature the same sub-game sections, though they hinge together in different ways. Played properly, the Arcade section can be used as a practice for the Movie Adventure.

For once, the plot of the Movie Adventure is relevant to the gameplay. It's like this, OCP (aka Omni Consumer Products, Robocop's creators) own Detroit, but want to get rid of it in order to build a new conurbation, Deltacity. Strangely, the inhabitants of Old Detroit aren't too excited by this idea, so they aren't exactly flooding in droves (to mix a metaphor) out of their homes. OCP, big hearts that they are, recruit a team of nasties called The Rehabs, whose job it is to, er, 'convince' the folks that moving is a good idea. Thing is, and here's the crux, they've also roped in Robocop to move the people along, which causes not inconsiderable confusion in the old silicon brain as to whether he should obey his creators or serve the public.

Five different sub-games can be accessed from the Arcade game, each of which gives Robocop a specific task to carry out. These sub-games also make up the Movie section. The first is a car chase set on the roads of Detroit. Sat in your standard issue police cruiser, you're continually informed of car crimes taking place around the city. Using the map, you need to locate the scumballs' positions, intercept them and ram the baskets off the road - this is accompanied by a huge crunching sound of crashing metal and breaking glass. Some of the crims are armed and fire on you as soon as you get near - not good at all. As soon as you see the back doors of the van swing open and the flash of gunfire, back off.

The subsequent two sections involve stalking around the corridors on foot. In the first scenario, terrorists have kidnapped important executives and are holding them at ransom somewhere in the building. Robocop has to explore the building's corridors, shooting punks before they get him and trying not to shoot innocent bystanders (heh). The second scenario is similar, but set in the streets, and Robo has to wipe out the Splatterpunks that are terrorising the neighbourhood. Section four sees Robocop trying out OCP's new design, a rocketpack. Yes, indeed, this is your chance to see that a Robocop can fly. Cue lots of tricky aerial building-dodging, ground strafing (ED-209s and tanks are your ground targets) and helicopter avoidance/destruction. The things Robo does to test a new product.

Finally, Robocop comes up against something of a rival in the form of Otomo. OCP's Japanese equivalent, Kanemetsu, have developed - wait for it - a kamikaze android ninja. He's lithe, he's nimble, and he leaps around the place like an extremely disturbed John Cleese imitator. Naturally, Robocop is challenged to duel in an abandoned warehouse, using only his fists (and - er - a machine gun, but we won't mention that).

Robo starts each section with 99% efficiency, or in English, 99% energy. As he's hit by bullets, cars and so on, the energy obviously decreases until it's spare part time.

Each sub-game uses solid 3D graphics complete with shading and detail that move at approximately twice the speed of sound, or so it seems. The graphics are at their best in the driving and corridor sections, and, particularly in the latter, the shadowy corners and tense atmosphere may remind you not a little of that scene in Alien. All sections have several external options, so you can show off to friends just how spatially aware you are. Samples are liberally scattered around too. They're taken from the films and, as such, couldn't be more authentic. As if all that weren't enough, there are sumptuously-drawn intermediate animations linking the sections in the Movie game.

Blimey. We have a bit of a scorcher on our hands here. Robocop 3 is perhaps the first example of what can really be done with a licence with some thought, time and programming excellence. Instead of the film licence simply being a pull for some flimsy platform exercise, the whole game is designed around the whole Robocop concept, and, as a result, it almost drips atmosphere.

How many times have you seen a film (like Terminator 2, for instance), thought "Now that would make a really great game!", and then been enormously disappointed when the game actually appeared? There's no fear of that here. Digital Image Design are obviously wildly enthusiastic about their subject - even though they could only work from the script during game development - and infused the game with that excitement.

Special mention should be made of the sound effects. All too often, programmers seem to assume the ST can't handle complicated samples during gameplay and, as a result, stick in some feeble chip effects.

Robocop 3 effectively sticks up two fingers at the doubters and shows that ST games can be as loud and atmospheric as any other format. The gunshots, the car-crash sample and the death cries are as raw and crunching, providing the perfect accompaniment to the on-screen mayhem. The idea of having separate sections works well, and the way you can practise each (the Arcade option) before tackling the big, serious challenge (the Movie option) means you're not stuck with a white elephant - a game two-thirds wasted because you can't, whatever you do, however hard you try, get past the second section.

We're not talking about a perfect game though. The Otomo section is very simplistic and doesn't offer a great deal of control over the outcome because of its practically non-existent controls. Disk swapping is fairly frequent, especially with a single disk drive, and you need to reload to be able to switch between playing the Arcade and Movie games.

If the film's anything like the game Robocop 3 will wipe the floor with Terminator 2. Even if it's not, you can always come back to one of the best, most violent, eye-searing, ear-bashing games that's been released for a long while. There's only one (completely predictable) thing left to say: "I'd buy that for a dollar!"

I'd buy this for a dollar!! Plenty of variety and the chance to play any section you like means you're not going to get bored or frustrated with an impossible section.