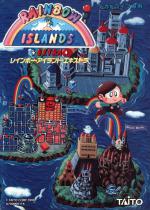 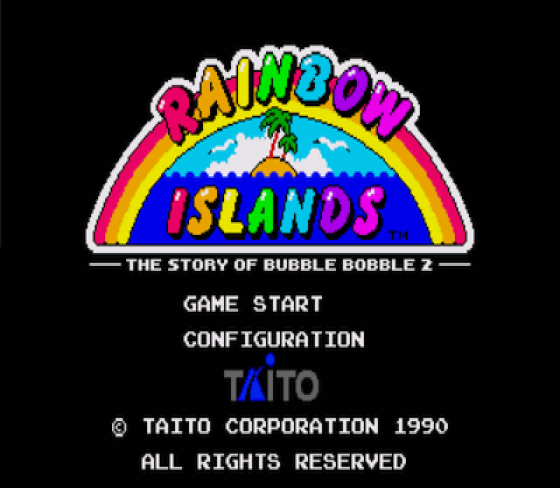 Bub and Bob are heroes! After rescuing their girlfriends from the evil clutches of The Boss of Shadow in Bubble Bobble, the lads returned to their home town in the Rainbow Islands and as the Japanese scenario puts it, got "Super-Drunk". The aftermath wasn't a near-fatal hangover as we might expect, but now the bubble blowing dinosaurs have changed back into human form.

But the lads' celebrations are short-lived. The evil Boss of Shadow has returned to enslave the Rainbow Islands and their inhabitants, and not only are our heroes trapped amongst this carnage but the islands are sinking as well! But there is one hope. If sevem huge crystals are collected, the Rainbow Islands and their inhabitants will return to normal, and why not give that Boss of Shadow something to think about at the same time?

Our heroes have one cunning trick up their sleeves. Their parents gave them the magic of the Rainbow, which generally means they can sling rainbows anywhere they want and jolly useful they are too. But the Boss of Shadow has to be stopped - and quick, so it's a case of scaling all four vertically scrolling levels or all seven islands, dealing rainbow death to any minions or end-of-island guardians that stand in the way. 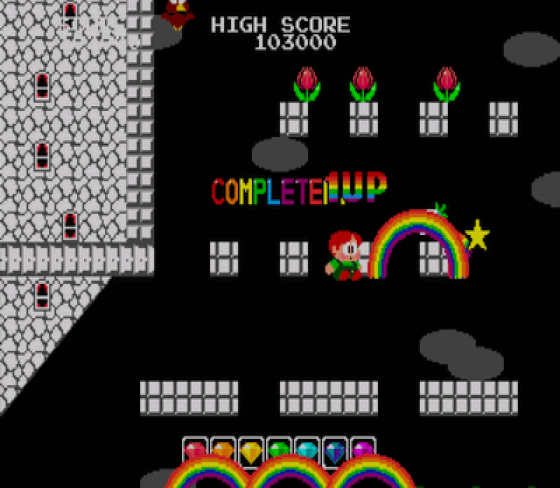 Bub has a tendency to lose all his power-ups if he dies, unless you collect the special power-ups in the secret rooms. The path to entering these rooms (there's one at the end of each island) couldn't be simpler(!). Simply collect all of the crystals from left to right - in order to reveal the secret door.

The screen is divided, from left to right, into seven different strips. The colour of the jewel you receive after crashing a rainbow on a baddie is determined by which strip the vanquished nasty lands in. Purple for the far right, and orange for the far left. 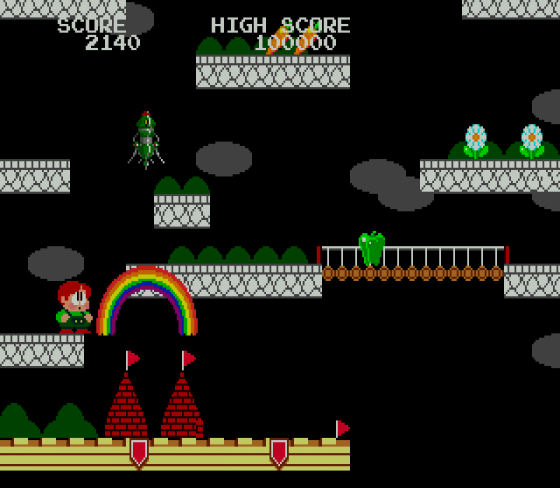 There are a huge amount of power-ups on offer in Rainbow Islands. Red pots are collected to give Bub an extra rainbow to fire (up to three can be collected), whilst yellow pods speed up the rate at which rainbows can be created.

Training shoes generally speed the lucky hero up a tad - just the business for avoiding some of the Boss of Shadow's more evil minions. Shields and various other "cutey" power-ups (like fairies) are also available as you progress through the game.

None of this Zippy or Bungle rubbish in this game. Instead, our heroes can fire off one, two or three rainbows at once, depending on the amount of power-ups collected. 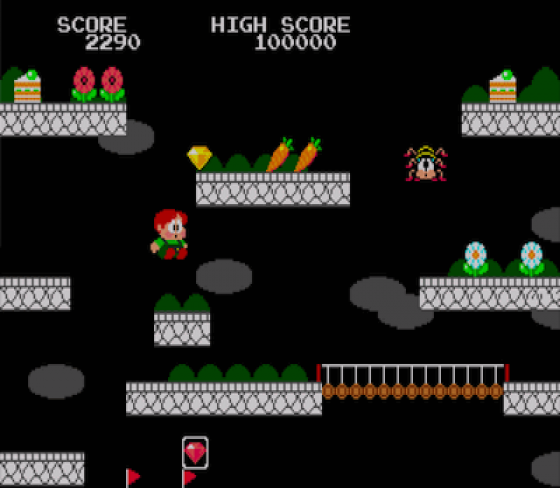 Rainbows are also useful tools for collecting any items left around, or for crashing onto the meanies' heads for extra points!

The rainbows best use, however, is for creating temporary platforms that Bub (or Bob) can climb and jump from. Beware though, the magic fades after a while!

At present Rainbow Islands is only available from Megadrive software importers and is not officially available from Sega in this country. This means that the game will work fine on Megadrives that have been imported from Japan, but will not work on official UK Megadrives unless you have a Japanese games adaptor (available from mail order important companies) or your machine has been modified (which we do not recommend you do as this invalidates your warranty). 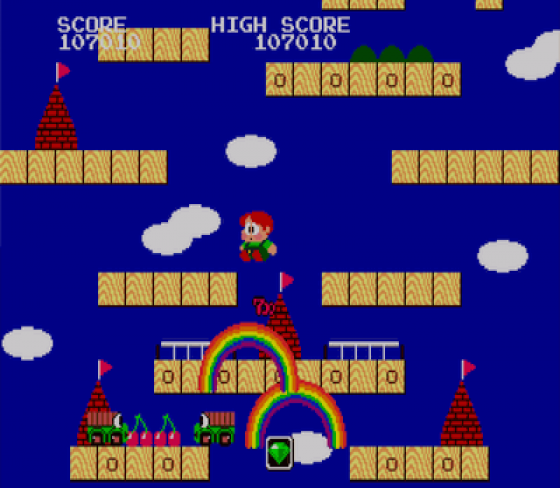 Brilliant! Two damn close versions of the classic coin-op for the price of one! Rainbow Islands has all the features of the coin-op and some more besides. The playability that made the arcade version so good has made its way in copious quantities to this fabulous Megadrive game, including all the secret rooms and bonuses!

My only gripe is that the sprites are incredibly flickery at time, especially when loads of rainbows are on screen. Rainbow Islands is still an essential purchase. If you've got an imported machine, do not avoid this at any cost!

Here's another classy Megadrive conversion! It's virtually identical to the original coin-op, with super graphics, an amazingly catchy tune to keep you humming while you play and very, very addictive gameplay. 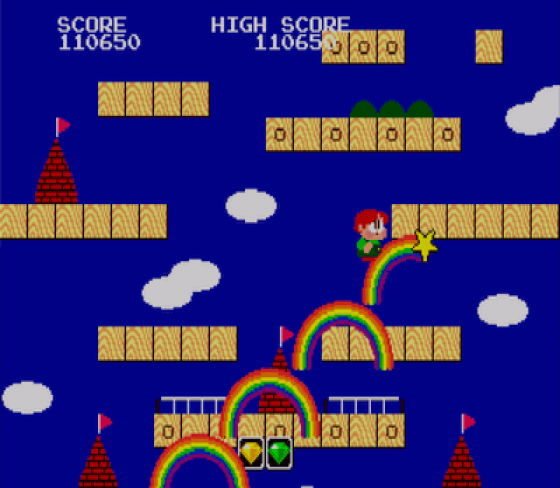 There are three skill levels, but to be honest you're better off playing on the normal level. "Easy" really is very easy and lets you finish the game far too quickly, which ruins the enjoyment somewhat.

I love the idea of having Super Rainbow Islands included in the package as it adds enormously to the lasting appeal. With all its amazing secret bonuses, Rainbow Islands isn't a game you'll tire of quickly. An absolute must for import owners.

Presentation 92%
All the cute coin-op presentation screens, along with loads of options and the choice of which version of the coin-op to play.

Graphics 89%
A bit different to the coin-op in its choice of colours.

Sound 83%
That "re-mix" of Somewhere Over The Rainbow is still there, and pretty jazzy it is too!

Playability 93%
All the rainbow-slinging, platform jumping fun of the arcade!

Lastability 90%
Not only do you get the "extra" version of the coin-op, but there's a choice of difficulty levels.

Overall 92%
A totally fabulous rendition of a classic coin-op that simply must be purchased!

A totally fabulous rendition of a classic coin-op that simply must be purchased! 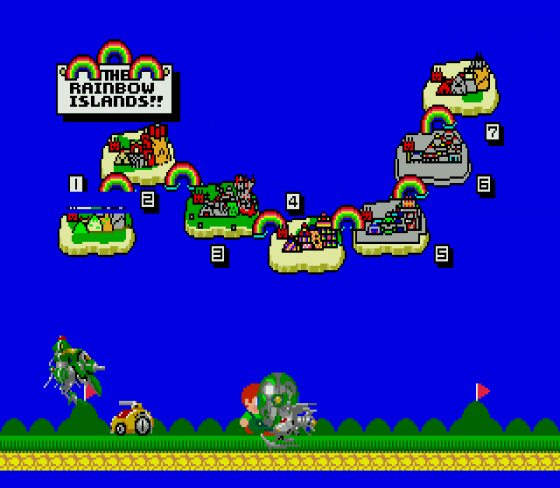 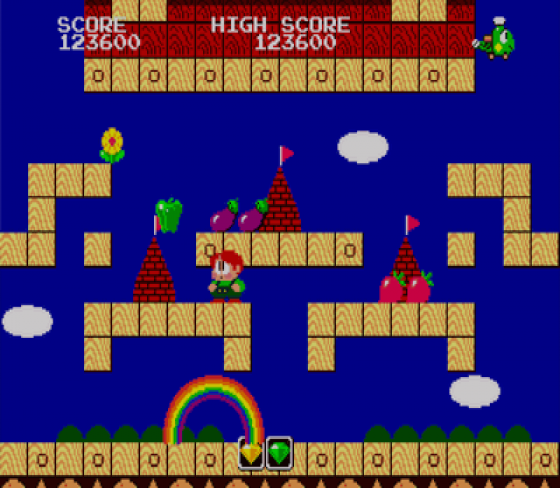 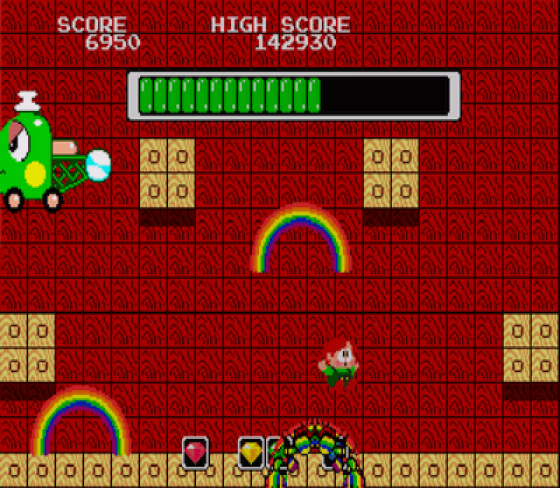 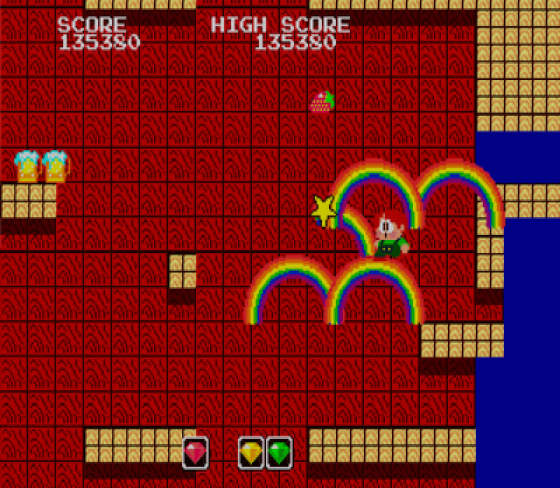