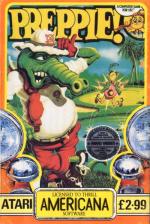 Cast your mind back to games of long ago. Remember an addictive piece of nonsense called Frogger?

You know, the one where a frog had to jump across roads, rivers and such like, desperately trying to avoid getting squished by lorries or croaked by crocodiles.

Thought you might. Preppie is a Frogger hybrid and has itself been around for quite a bit. An award winner in its day, Preppie has you retrieving golf balls through ten levels of difficulty.

Preppie is a small, slow-gaited chap who starts off in a safe zone at the bottom of the screen.

He must cross a fairway and a river to retrieve each golf ball - and must then return it to the safety zone from whence he came.

Whizzing along the three-lane fairway and golf-carts, lawn-mowers and bulldozers, all of which can bring sudden squelching to Preppie if he gets in their way.

When struck by one of these vehicles, Preppie flattens and spreads out, just like a piece of dough under a rolling pin.

Once safely over, Preppie finds himself on a traffic-free river bank. At the higher levels, a huge frog comes galumphing along this bank bent on crushing anyone in its path. (Frogger's revenge?)

Preppie must not traverse the river, also three-laned. He accomplishes this by leaping on passing logs, canoes and alligators, hop-scotching his way to the far bank.

Just to make life more stimulating, the gators' mouths open at random and a time limit ebbs remorselessly away.

The higher the level, the more traffic there is and the faster it moves.

The game can be played with one or two players and can be started at any level but the last.

The animation and graphics are simple but attractive. Jolly musical effects add to the fun.

Preppie is an old game yet it still has that magical pulling power that so many games seem to lack today.

A classic Atari program, it's addictive fun and well worth the price.

A classic Atari program... Addictive fun and well worth the price.