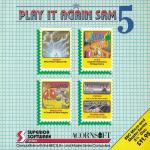 I don't know if it is a limitation of the machine, or of programmers' imaginations, but the more reviews I do (and this is only the third) the more I realise the few narrow areas into which all of the different games seem to fall. There may be as few as a dozen or so different game types, and all the hundreds of different offerings (with the occasional exception, like Imogen, which therefore stands out) are just variations on these few themes. Now this may not come as any sort of revelation to some of you, but I said in my first ever review that I was not really a games player, so having now been obliged to sit down and both analyse games and formulate some views on them for you to read, it has come as a bit of a disappointment to me. To be honest, apart from the previously- mentioned exception, I have been hard put to find nice things to say about the contents of this disc and, with regret, I have to say that it is not one of Superior's better offerings. Anyway, enough wittering and on with the individual reviews.

Ho hum. Yawn. So there's this wizard (that's original!) that has been put into some caverns, and has to solve puzzles and collect spells in order to get out. Nothing special about that for an adventure game, pretty standard fare actually. The difference with this one is that you get some pictures too. Not just any old blocky, jerky, rubbish either. The phrase "small, but beautifully formed" might have been minted for this game. The amount of work that the author (Michael St Aubyn, who really deserves to be named) has put into his game must be seen to be appreciated.

The caverns are portrayed as fairly standard platforms on which the characters move around. I say characters because you, the Wizard, are able to change into an animal at any stage of the game to enable you to climb ropes, and jump across gaps and over obstacles. It is the detailing of these characters (and others which you meet), and that of the various objects which you find in the caverns that really sets this game apart. The screen is all one colour, which is the smallest of the two complaints I have, but this is more than compensated for by the detail that has gone into the black outline drawings for the characters. This means that they are the same colour as the background, but they are nonetheless easily seen.

I know I'm harping on, but they really are very well animated, and with a large dollop of humour throughout. There is no time limit to the game, but there is a limit to the number of times you can change between characters; this is continuously shown as the number of possible changes remaining. You start with 150, which may seem a lot, but there are sixteen differently-themed caverns to complete, half of which need eight or more changes. Sometimes you can make an infinite number of attempts at one of the puzzles in a cavern without changing character, until you succeed. With others though, each time you fail you need to change character a couple of times to get back into position for another attempt, and this can very quickly drain your remaining stock of changes.

Having been through the game several times, I reckon the minimum possible number of changes needed to complete it allows you a fair leeway for mistakes. Don't get too cocky though, cos some can be real stinkers! The caverns are lettered from A to P, but this does not necessarily mean that cavern A is easier or needs less changes than cavern B. They are played in alphabetical order, but any one of four is randomly chosen as the starting point when loading, so completing cavern P could lead to cavern A. All caverns have names, usually a pun on the theme and, once discovered, these can be used as passwords to allow you to move between them at any time. If you have not solved all the puzzles in one cavern, and move to another, when you return you will find it as you left it, i.e. still unsolved!

The final action (which can be a puzzle in itself) in each cavern is to collect the spell, which then transports you to the next. All are larger than the actual screen display, and to reach these other areas you move off the screen, as there is no scrolling. This does not much detract from the game, as the new screen appears quite quickly, but it does mean that it is worth having a look around as much as you can first, to see what is there. As to what to do, this is not always obvious, and sometimes requires some lateral thought. Some of the puzzles also require some nifty finger work and good timing. Ah, yes, you're no doubt on the edge of your seat waiting to read what my second complaint is, at least I hope you are? It is not one that many of us suffer from very often, but is very distressing at times, this being one of them. Cries of "Get on with it!", do I hear from the rear? I don't quite know how to put this, I'm doing my best, but I'm running out of ideas as to how to keep you waiting any longer so here it (finally) is. There ain't no more! There's only the sixteen caverns, and once they're done, that's it.

OK, so you get a message about how everyone lives happily ever after, which is nice, but what do you do then? Well, I went back and played the game again a few times, and again a few times more, far into the night, trying different approaches to the various puzzles, which is how I arrived at my figure for the minimum number of changes. I have been left wanting more, which speaks well of the addictiveness of the game, but where do I get my next fix? Please, somebody, tell me that there is a sequel, or that maybe you have taken it upon yourself to hack into the program (I promise I won't tell anyone else!) and produce some further puzzles to solve. It seems such a shame to have this game and its characters come to such an abrupt end. Sequels to all sorts of things (I won't embarrass the actors by naming them) have been built on far more flimsy foundations than this game has. More perleeeease!

I suppose all space-invader type games have to be the same cos that's the type of game they are. As I am not a devotee of this type of game, and in fact generally avoid playing them, I do not really have much idea of what is or is not a good implementation of the format. Those I have seen all seem to have you the defender at the bottom of the screen, firing as fast as you can at all the invaders coming from the top of the screen and getting ever lower if you do not zap them first, until eventually they reach your level, and then wipe you off or take one of your 'lives'. There seems to be little strategy other than 'fire as fast and often as you can', occasionally aiming for the high-value targets that randomly appear to menace you, or float across the screen to distract you from the lower-value invaders. I would think that fans of this type of game, where the sole object seems to be to achieve as high a score as possible and/or beat your (or your friends) previous high score before Repetitive Strain Injury sets in, would be able to rate this particular game on a scale of one to ten for all sorts of things which they would be looking for. Me, I ain't got a clue, so all I can say is that it looks pretty, I managed to master the controls before I got bored, gradually got higher scores each time I played it, until I thought 'OK, done that, what's the next game to look at?' 'Nuff said!

Fly over the enemy base and shoot everything you can without getting shot down yourself. Try to get a high score, higher than your previous anyway. The view you have of your efforts is from behind, to one side and above your aircraft. This manages to give you a sort of 3-D view of the terrain over which you are flying. It does make it a bit difficult at first to judge your position in relation to the obstacles and armaments which you have to avoid and/or shoot at, but you get used to it after a fairly short while playing, and your aircraft throws a shadow on the ground, which is a great aid to positioning yourself. I haven't managed to get very far into this game, not through lack of ability, I just suffer from air-sickness. That's my excuse anyway! It seems to be a few steps up from Bug Blaster, in that it requires a greater degree of skill to position yourself for your attack run, but once again the main objective seems to be only the betterment of your previous score, although this is not to say that you couldn't have fun doing it.

Although this game was originally released at about the same time as Imogen, the difference in the quality of the graphics is enormous. This game has the slow blocky graphics of the early days of the Beeb. I do not know much about graphics on our machines, but I am aware that some modes offer better resolution than others, although perhaps at the expense of extra problems with the programming. This is basically a fairly primitive platform game, in which you have to move around collecting some objects, whilst avoiding being hit by others. You are Cyril, working alone in your chemist's shop and, obviously not having listened to Mum's advice, have swallowed a powerful reducing agent which has left you extremely vertically challenged.

Your only hope of returning to normal size is to reach the Magic Elixir with which every chemist's shop is stocked. Unfortunately for you, this is on the top shelf right at the back of the shop. If only the reducing agent had been there, out of the way, you probably wouldn't be in the pickle you are in now. Oh well, perhaps you'll learn? With the top shelf your ultimate objective, you need to work out your route up through the shelves and the boxes and bottles on them. This is made harder by the speed (or rather lack of it) of reaction to your key-presses. Presumably this is again affected by the graphics mode, and is a rather frustrating aspect to the game. At least this game does have the potential to be completed, although having once done so, I doubt you will be tempted to try again, at least not until next early-closing day.

Not one of Superior's better offerings.
Logout