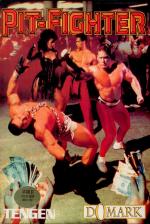 Can't see your careers officer recommending this as a profession - the hours are terrible, and every time you fall over, someone stamps on your head. Pit-Fighter is a vicious beat-'em-up with loads of dirty moves. Your opponents are ruthless and you need to be too. Anyone on the ground gets laid into, so forget all that Marquess of Queensberry stuff and put the boot in.

You choose between three lovely boys - Buzz, Ty and Kato. Each has his own brand of special moves - head butts, punches and a scissor kick which brings tears to the eyes. Your chap is fully joystick-controlled: hit Fire and move the stick to fight. There are seven different opponents to maim before the final duel with the ultimate warrior.

Each opponent has his (or her!) own low-down dirty ways of fighting, so you need to adjust your tactics. What's more, someone has carelessly left weapons scattered about to increase the mayhem factor - knives, throwing stars, crates and motorbikes. Motorbikes? No, you don't run over your opponent - you pick 'em up and throw 'em.

Little bars at the top of the screen show your health. When this reaches zero, you don't get up again. You get three lives before having to start over again. At the end of each bash, you collect your prize money plus an extra brutality bonus - so viciousness pays!

The game really comes to life when two players take part. You get two baddies to deal with and you can even duff each other up.

As in the original coin-op, the sprites have all been digitised and there is a clever scaling routine that shrinks them as they move further away from the "camera". They look rather blocky at close range, however, but the graphics are quite acceptable - until the characters start moving. There are loads of complex throws and kicks all done in two or three frames, so everything looks very jerky. One second your chap is standing still, the next doing a flying kick. Especially in conditions like these, landing a blow with one of the more impressive moves is quite satisfying. But unfortunately, there are no sound effects, just chip music played throughout the whole thing.

The scenario is extremely tacky. No noble cause, no damsel in distress to rescue, just clobbering people for money with a bonus for being especially nasty.

IF you can live with that, you find that the main trouble with Pit-Fighter is its unresponsive controls. Large parts of the game are spent madly waggling the joystick around, desperately trying to get your chap to do all these fancy moves while the other bloke is bashing you in the head.

The novelty of the sheer roughness of the fighting and the fancy sprites wears off after a while, and you're left with an average beat-'em-up that is only real fun with two players.

Fewer moves than IK+ Karate, and just not responsive or playable enough to give that game much of a run for its money.