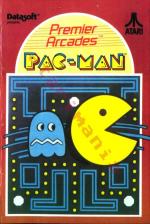 I first discovered Pac-Man in Las Vegas [What a name-dropper! - Ed]. While all around me were pumping money into one-armed bandits, I was supporting the local arcade machine leasing company.

It's an addiction that has stayed with me throughout the years. I've played the game on a variety of machines and for more hours than I care to admit and I still love it.

Imagine my delight then, to get a review copy of US Gold's release of Pac-Man under licence from Datasoft.

It's described as "the official version of the arcade classic" and is about as close as you can come to the original without actually spraying light ale around the room for effect. I was pining for the Nevada desert after a few games.

If you don't know what Pac-Man is, I hope you've been very happy in the monastery or convent for the last five years. Like Space Invaders, the game has become part of the micro industry folklore, so I shouldn't need to describe it.

Suffice to say that in the unlikely event of your software collection not containing a version of the game, you should buy this one.

In the unlikely event of your software collection not containing a version of the game, you should buy this one.