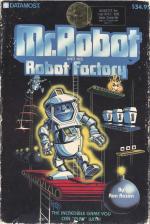 I must admit that, when I first booted Mr. Robot, my immediate thought was "Ho hum another levels, ladders and power pills game".

Level 1 presented no difficulty other than determining which jumps were permissible and which were fatal. Level 2 wasn't much harder.

Slowly, though, things started to get a bit trickier. The first sign of trouble came on Level 4 with the bombs. They are not active until you walk on them, whereupon they fizz for a few seconds and then explode.

The problem is that you need to walk on them in order to collect all the power pills. It's a one-way journey - once they've exploded there's nothing to walk on. This means that you've got to plan your route around the screen.

Then come the trampolines to bounce you on your way, the transporter tokens which may jump you out of the microwave open into the central heating boiler, and of course through all this the Alienfire is still intent on your destruction.

Although the game starts off easy, you can select which level you start from. This means that you don't need to work your way up through levels which you've already mastered.

According to the manual only the first five levels are selectable. However in practice you can select any of 22.

Level 13 is a bonus round with no obstacles, and I found Level 14 remarkably easy, but there are plenty of "killer" levels to keep you busy.

If you've mastered the levels and think you could design better, you can give it a try.

In addition to the game there is a DIY section called The Robot Factory that lets you create up to 26 of your own screens. These can be saved to a separate disc.

New screens are drawn by picking up pieces with the cursor and simply putting them where you want them. It's very easy. You can playtest your screen and keep editing it until satisfied.

Having the same elements to build with, my screen came out looking very much like the real game screens. However I must admit I'm not very creative when it comes to such matters.

If you've a flair for design you could probably combine the elements in a more creative way.

Mr. Robot is an American import from Datasoft and is being distributed in this country by Zoomsoft. It is only available on disc at £14.95.

This may seem a bit expensive. However, when you consider the game's 22 levels and the facilities to build an extra 26 levels it's likely to last you for a bit longer than the average levels and ladders game.

Yes, it's another platforms and levels game, but with 22 levels, it's likely to last you for a bit longer than the average one..