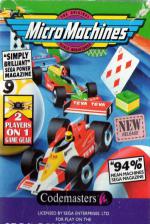 When you're halt the size of a matchbox, racing around a bath tub or a sand-pit should be easy... but it's not! Prepare to be shrunk.

Micro Machines is a wild and wacky racer with a difference: its vehicles are half the size of a matchbox and you drive them through extremely unusual terrain. Pick your character from the list of eleven on offer, each with a different degree of racing skill, then compete against three computer-controlled players.

First take part in a bath tub qualifying race. Win this and you're through to the proper game.

The 25 varied levels allow you to control tricky tanks in the toy room level, skid around a sand-pit in a racing jeep, dodge nails, glue and oil in the workshop and even fly a liny helicopter in the garden level.

To qualify for the next race, you have to be first or second past the chequered flag; any lower and you forfeit a life and must try again.

When you win a certain number of races, you enter a bonus round in which you tackle an obstacle-laden course within a lime limit to receive an extra life.

If a one-player game doesn't suit you, grab a friend and battle it out in the head-to-head. To score points, speed ahead of your opponent so he disappears off the screen.

I was well impressed with this little racing sim. The Mega Drive version was packed with playability and this is an almost exact copy. I particularly like the characters you choose at the start of the game. Trouble is, none of them look anything like me - lucky for them!

It's a real novelty to race around a breakfast table, complete with cereal packet jumps and orange juice stains which slow the cars down. I'm always bombarded by other vehicles, though - they push me off the table onto the floor! Oh, I wish I was a better gamesplayer!

Micro Machines is the sort of game you'll come back to again and again. Thoroughly recommended. 83%

Micro Machines is a real favourite of mine. I first played it on the 8-bit Nintendo (yeuck!) but thankfully it's been converted to Sega systems. The tiny vehicles you race around odd racing tracks are licensed from Galoob's toys. This is what makes Micro Machines so original - where else could you drive on a breakfast table or chess set? Codemasters have done a great job of squeezing it onto the Game Gear. All the graphics are smooth and slick, packed with colour and animation. Players choose from a wide selection of competitors who all have strengths and weaknesses.

If you're a fan of racing sims, you'll be addicted to Micro Machines from the word 'go'. It's extremely fast and has lots of variety so you'll never get fed up of it. The 25 tracks can be played as a one-player challenge or two-player tournament, using the Gear-to-Gear link.

Either way, you'll be playing this baby till the cows come home! 91%

A fantastic racing game and 100%
original. Get it now!

If you're a fan of racing sims, you'll be addicted to Micro Machines from the word go... You'll be playing this baby till the cows come home!