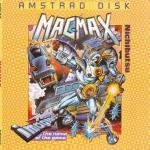 MagMax! Not a kind of nuclear powerplant, not a political leader, not even a subtle ripoff of an Aussie film. MagMax is mankind's last defence against the Mechanoid hoards who have travelled unmappable distances from an undiscovered galaxy to wreak unimaginable havoc on the Earth and all her dominions especially Chiswick. MagMax is the first and last prototype robo-centurian: A feat a little difficult without another 99 robots in evidence. But murmur not. Surely it's time to Save the World. Again,

As a matter of fact, when the game opens, it's all a little late for homo sapiens. There's not many left of them, but MagMax is just as happy about going on a glorious vengeance mission as he would be if there was anything to be protected anymore. One of the last vestiges of humankind to be blown away were the Scicorps. and it was these brave men and women who designed and constructed MagMax. Well, most of him.

He starts off as a small, jet powered machine. Somewhere in the bowels of the earth lie the components he needs to build up week by week into the complete guide to fishing and fish. Buy part one, get part two and this amazing fish scaler free! From your newsagents now. Sorry, that should have read "build up to a powerful lighting robot, capable of removing the last vestiges of Mechanoids from Terra." Terribly sorry.

Over the landscape he flies, spitting depleted uranium-tipped bullets at. the ground enforcements.

Some of these look uncannily like pairs of lips spitting red humbugs at the robot, but then Mechanoids always were a little odd. The rest of them at least look the part of the arrogant invaders, with bristling towers and evil blobs populating the surface. These must be cleared before MagMax can drop to the subterranean levels for the parts he seeks.

As he obtains the add-ons from the Moho's equivalent of Halfords, his strength, stamina and firepower all go up. He is thus able to better fight the incoming masses - one day a Mega-Zap molecular debonder. the next a Repello-wall chest shield with positron deflection circuits. It all helps. One of the first items on the itinerary is the special lance in his weapons system. Most ne'er-do-wells succumb to a quick blast of Super Laser, but some need to feel the breath of the Lance before they will lay down and die.

Needless to say, all this body-building has not gone unnoticed at Mechanoids HQ. One minute they were busy planning the horrendous expense of crossing yet another galaxy to lay waste another planet, the next they were under attack. They soon cottoned on to the undeniable truth that something had to be done.

So now, every time our hero MagMax finishes a level stronger, faster and more lethal, the leader of the Mechanoids is waiting for him. Only by utterly defeating him time and time again can MagMax make the grade and free all Earth from the slimy grip of the Invaders!

This arcade conversion has the look and feel of a reasonable quality game. A standard mishmash of ideas are mixed around, and the result is something that should give enjoyment to a lot of people. It starts like Zaxxon, but soon progresses to something with a little more depth. Not one of the world's mega-games, but a nice try.

I found MagMax really difficult to get into. The homing shots were very difficult to avoid, and it was not until I made it to a hole and went underground that I started to sweat [glow - Ed].

The standard zap-everything-that-moves tactic seems to work. It's great if you can build yourself up but I didn't share the enthusiasm of others in the office.

Ouerr! Dragons! Usually it takes at most two minutes to remember where I've played the game before: Not MagMax. It's a bit like listening to a record, bits of which have been used for TV adverts.

Still, there's a nice line in problem-solving sequences, lots of simple zapping and quite a lot of fun all round. It has most of the things I carp about when other games miss them. So why aren't I more excited?

It starts like Zaxxon, but soon progresses to something with a little more depth.