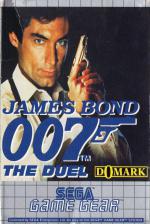 Some call him 007, some call him Jimmy and the bad guys call him trouble. Bond is back in a hot new game from Domark.

In another collection of death-defying missions, James Bond returns to apprehend the evil Professor Greypen, a mastermind with an evil plan#to take over the world's governments. Greypen, hiding out on an artificial island somewhere in the Pacific, plans to launch a shuttle with a deadly high-powered laser station into outer space - and use the station to destroy any target on earth he chooses...

The player guides the intrepid Bond through 12 tricky platform levels full of familiar characters from the (ilms and books such as Jaws. Oddjob and Bones. Other naslies include robotic snapping fish, deadly plasma spheres, hot lava balls and hot geysers. Each level is split into four missions.

Bond carries a pistol, and grenades which he can replenish by picking up special cases from 0. If things get too hot to handle, touching one of the computer terminals dotted aiound each level will save Bond's position. There are also passwords and three difficulty modes, and a choice of sound effects or music alone, or a mixture of the two.

To give James Bond its due, the graphics are quite smart, with Bond leaping around the platforms and blasting away at the bad guys in style. The animation from Domark's Kremlin programming team is great - almost up to the standards of Prince of Persia. Sound isn't at all bad, either, with a recognisable 007 theme tune and spot sound effects.

It's just the playability that lets the whole thing down. I'm fed up with jumping, shooting and collecting power-ups. Where are all the original ideas? Do they go somewhere and die so that we can be given another shoot-'em-up or platform game?

If you're a fan of 007 you may find playing your hero a real thrill, with all his secret-agent gadgets and smart suits. But if you want something original that will test your game-playing abilities to the full, this certainly isn't it. 68%

Is that really James Bond? My first reaction to the tiny besuited character was that it could be anyone from Bob Holness to Omar Sharif. And there's not enough originality here to make anything more than a rather bland plaformer. Although graphically the game is quite appealing, some of the sprites are a little too light-hearted - the bad guys look like milkmen and the robotic fish are a bit pathetic. The sound is another big letdown: weedy and uninspired, and even the Bond theme doesn't sound very convincing.

The James Bond films should provide a perfect scenario for a cool game, but this time the good ideas have slipped through the net. 61%

A good-looking game that's let down by monotonous gameplay.

A good-looking game that's let down by monotonous gameplay.