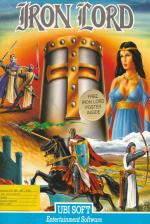 The age of chivalry returns in the shape of Tibor junior.

The age of chivalry returns in the shape of Tibor junior.

Look out adventure freaks. This one's gonna knock you for six. Included in this excellent package are two double-sided disks, cram-packed with action, in a quest to restore goodness to the land.

The storyline? The wicked sorcerer Zolfahr has returned to reclaim the kingdom of his borther Tibor. Darkness reigns over the land, but the king's son has escaped the evil baddie, and he's determined to live up to the old legend that only one of Zolfahr's kin can restore light to the world.

OK, that's a very brief resume indeed. In short, he's grown up and he's out on the prowl to raise an army to defeat his uncle, and this is where you step in.

You start off the game with an overview of the old king's castle and the surrounding countryside. Using the joystick, move the cursor around to wherever you want to go and press Fire. Try looking around the castle first.

In true adventure form, most of the minor action takes place in windows. You can just about make yourself out when you're stumbling around the grounds.

Next up, try one of the villages. There's a neat little horseriding sequence as you travel around. In Chatenay Malabre, you'll come across the grand old archery contest, where you can prove your mettle as a combatant. You'll also meet some very interesting people to chat to.

Get through the archery and it's onto the arm wrestling. Beat nine adversaries and you're doing well. Next up comes the dice-throwing and a much needed chance to make some money.

The idea is generally to impress as many people as possible, so that you can assemble a fair sized army to take on Zolfahr.

Take care on leaving villages, you may be confronted by an assassin and challenged to a duel. If so, there's nothing to do except waggle your joystick to the death.

Having come through all of this adventure and more, through the use of some excellent icon work, discussion and hunting about, you should have enough support to go back to the castle and levy your troops.

Position them well to ensure you don't get overwhelmed by your uncle's forces.

Once the great battle is over and, assuming you've been successful to date, it's time to dive into the sorcerer's labyrinth, six levels deep and full of danger. Watch your energy level here, as it reduces the longer you hang around.

Between each level of the labyrinth, you'll encounter an arcade sequence, where you'll have to be quick to destroy the monsters as they spit acid at you.

Last, but by no means least in this superbly styled adventure, you get to take on Zolfahr himself.

There you have it. An excellent offering of epic proportions, quite a rarity these days. With the clever mix of icon entry, arcade style screens and windows, Iron Lord is exceptional value for money on the old CPC, and one game no serious gameplayer should be without.

An excellent offering of epic proportions, quite a rarity these days.